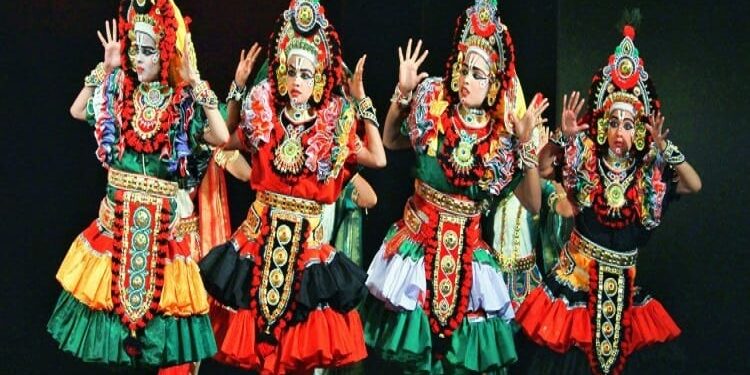 More than  400 years ago, Yakshagana as an art form originated.  The word Yakshagana is derived from two words: Yaksha means nature’s spirit and Gana means song. This theatre play is a combination of dance, music, dialogues, costumes, face-makeup, stage techniques of a unique style and narrates stories of kings, history of places or events of Purana. Depending on regional languages, the dialogue is delivered in either Tulu or Kannada. It is popular in the districts of Uttara Kannada, Udupi, Dakshina Kannada, Shimoga and Kasaragod. It has become popular in Bangalore and Mumbai in recent years.

The first written script on Yakshagana was found in the ‘Lakshminarayana Temple’ in Kurugodu, Somasaudra, Bellary district dated 1556 CE – a copy of it is also present in the University of Madras. The scripture states that the land has been donated to perform the art in order to enjoy Yakshaganatalamaddale in the temple. A piece of evidence is in the form of a poem as well, written by Ajapura Vishnu in the story ‘Virata Parva’ on palm-leaf. Few notable poets such as Ajapura Vishnu, Purandaradasa, Parthi Subba, Nagiresubba, King Kanteerava Narasraja Wodeyar II have authored 14 Yakshagana plays in Kannada script. Mummadi Krishnaraja Wodeyar also wrote several Yakshagana prasanga, including ‘Sougandhika Parinaya’.

Generally, the stage is built on mud based foundation in an open ground and decorated with special lighting, similar to theaters. The performance starts in the night and continues until dawn. The costumes are rich in color, where the costumes (or vesha) depend on characters depicted in the play (prasanga). It also depends on the Yakshagana style (tittu).

Yakshagana ornaments are made out of light wood, mirror, and colored stones. The costumes consist of headgear (Kirita or Pagade), Kavacha that decorates the chest, Buja Keerthi (armlets) that decorate the shoulders, and belts (Dabu), all made up of light wood and covered with gold foil. Mirror work on these ornaments helps to reflect light during shows and add more color to the costumes. Armaments are worn on a vest and cover the upper half of the body. The presentation of the puppetry is highly stylized where the puppets (generally 18 inches high) wear costumes similar to those worn by live actors of Yakshagana. They have elaborate makeup, colorful headgear and heavy jewelry.

A typical Yakshagan group consists of

The storyteller (the Bhagavata) narrates the story by singing while the actors dance to the music, portraying elements of the story. All the components of Yakshagana—including the music, dance and dialogues are improvised depending on the ability of the actors and hence, there can be variations in dances as well as dialogues. The acting in Yakshagana is  best categorized as method acting. The performances have drawn comparison to the Western tradition of Opera. Yakshagana is similar, if not directly related to various forms of dance-drama in neighbouring states, most notably the kathakali classical form of Kerala and the terukkuttu street theatre of Tamil Nadu.