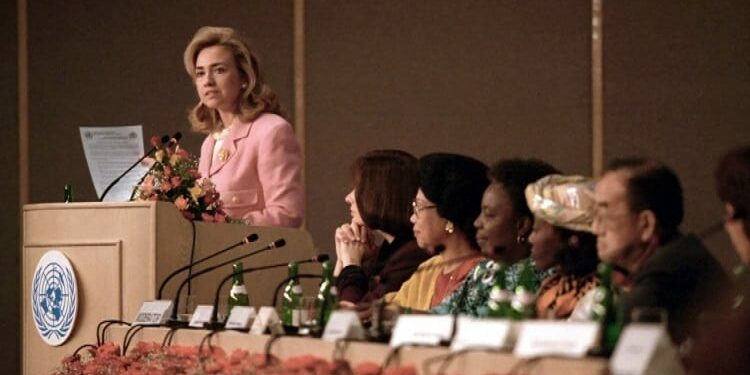 The vulnerability of women has increased during Covid pandemic and post recovery phase. In this context, the 25th anniversary commemoration of the Beijing Declaration and Platform for Action in 2020 is a rallying point to insist on finally achieving the human rights of all women and girls.

In news: UNGA celebrated the 25th Anniversary of the 4th World Conference on Women.
Placing it in syllabus: United Nations

Outcome of the conference:

It was emphasized that throughout 2020, UN Women would build on other galvanizing moments in the 21st century women’s rights movement:

The Beijing Declaration and Platform for Action of 1995 is the most visionary agenda for the empowerment of women and girls, everywhere. It was developed at the Fourth World Conference on Women in Beijing, China, known as the largest-ever gathering of gender equality advocates. It was adopted by 189 governments committed to taking strategic, bold action in 12 critical areas of concern: poverty, education and training, health, violence, armed conflict, economy, power and decision-making, institutional mechanisms, human rights, media, environment, and the girl child. A parallel NGO Forum was held in Huairou near Beijing which drew around 30,000 participants.

History of the previous 3 conferences:

1980: 145 Member States gathered for the mid-decade World Conference of the United Nations Decade for Women in Copenhagen. It aimed to review progress in implementing the goals of the first world conference, focusing on employment, health and education. A Programme of Action called for stronger national measures to ensure women’s ownership and control of property, as well as improvements in protecting women’s rights to inheritance, child custody and nationality.

1985: The World Conference to Review and Appraise the Achievements of the UN Decade for Women took place in Nairobi. The conference’s mandate was to establish concrete measures to overcome obstacles to achieving the Decade’s goals. Participants included 1,900 delegates from 157 Member States; a parallel NGO Forum attracted around 12,000 participants. Governments adopted the Nairobi Forward-Looking Strategies for the Advancement of Women, which outlined measures for achieving gender equality at the national level and for promoting women’s participation in peace and development efforts.