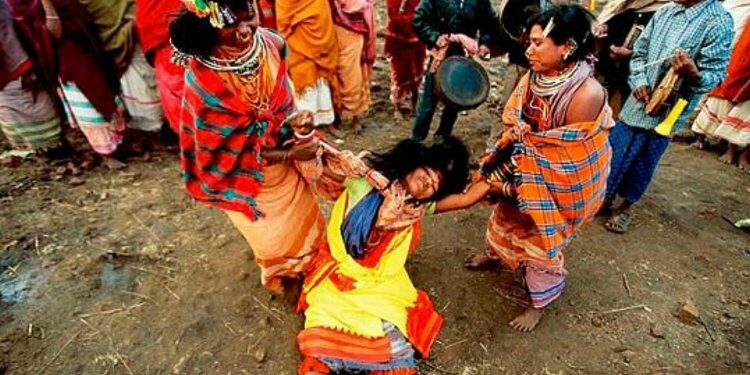 India is a land where the women are considered as a token of their community, family, caste and all other diverse divisions. In some places people worship women as goddess but somewhere else they are killed considering them witch. Though many state laws are in place the problem has not been uprooted from the society.

In news: Recently cases of witch hunting were reported in the Northeast.
Placing it in syllabus: Society

A woman and a man were killed on suspicion of being witches in Karbi Anglong district of Assam. Both belonged to the Adivasi community and a kangaroo court in the village had decided that the two were involved in practicing “black magic”. The attackers burnt the bodies. After they were arrested they confessed that they believed the two deceased spread disease in the village and brought misfortune to the village.

There is no specific and particular national level legislation that penalises witch hunting. Hence the provisions under the Indian Penal Code 1860 (Sec.302 which charge for murder, Sec307 attempt for murder, Sec 323 hurt, Sec 376 which penalises for rape and Sec. 354 which deals with outraging a woman’s modesty) are used as an alternative for the victim.

Partner for Law in Development (PLD) and many other NGOs are working for preventing and protecting women from the social evil of witch-hunting. Rural Litigation and Entitlement Kendra, had also filed a PIL in Supreme Court relating to the abuse of women in name of witch-hunting on behalf of 1000 rural women in Jharkhand who were victimised of witch-hunting.

What needs to be done to solve the problem?

India has signed Convention on the Elimination of All Forms of Discrimination against Women (CEDAW) on 1993 and had agreed to eliminate discrimination and social cruelty against women. In addition to it Section 5(a) of the concerned convention explicitly provides that the states should take appropriate measures to modify the social and cultural patterns of conduct of men and women.

Regional spread of the practice in India: 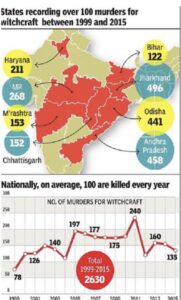 Reasons for prevalence of this practice in India:

Does it exist in Western Societies?