WHO report on e-waste In news – The recently published WHO report titled ‘Children and Digital Dumpsites’ underlined the risk children working in the informal processing faced due to discarded electronic devices or e-waste. 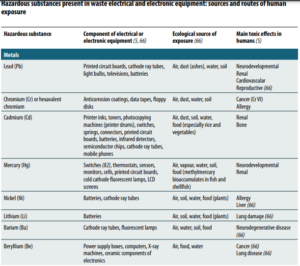 E-waste typically includes discarded electronic devices such as computers, televisions, mobile phones, tablets and other video and voice recorders, as well as electrical appliances, both heavy and light. About 95 per cent of India’s e-waste is recycled in the informal sector and in a crude manner. India’s 1st e-waste clinic was opened in Bhopal, Madhya pradesh.