Who is a doubtful citizen?

The term refers to persons whose citizenship was doubtful or was under dispute and were categorized as ‘D- Voters’ during the preparation of the National Register of Citizens in Assam.

A provision for this “doubtful citizenship” has been given in the Citizenship (Registration of Citizens and Issue of National Identity Cards) Rules, 2003 (2003 Rules) under which the NPR is being prepared. 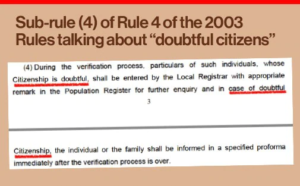 Sub-rule (4) of Rule 4 of the 2003 Rules – reproduced below – says that “during the verification process of the Population Register (or NPR), a step before the NRIC is prepared, an individual or a family would be marked as “doubtful” citizen or have “doubtful citizenship”.

What are the processes involved after declaring a person as a doubtful citizen?

Referring the cases to Foreigners Tribunals by the Superintendent of Police

Consequences of categorizing a person as a doubtful voter?