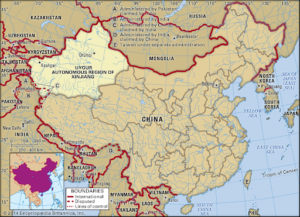 Importance of the region for China

Connectivity to West and Central Asia:

Chinese initiatives in the region:

In July 2019, 22 countries issued a joint letter to the 41st session of the United Nations Human Rights Council (UNHRC), condemning China’s mass detention of Uyghurs and other minorities, calling upon China to “refrain from the arbitrary detention and restrictions on freedom of movement of Uyghurs, and other Muslim and minority communities in Xinjiang”.

In the same UNHRC session, 50 countries issued a joint letter supporting China’s Xinjiang policies, criticising the practice of “politicizing human rights issues”. The letter stated, “China has invited a number of diplomats, international organizations officials and journalists to Xinjiang” and that “what they saw and heard in Xinjiang completely contradicted what was reported in the media.”

In October 2019, 23 countries issued a joint statement at the UN urging China to “uphold its national and international obligations and commitments to respect human rights”.

India and the Xinjiang Problem

Mould your thought: Xinjiang is strategically important for China. Critically evaluate the policy of the Chinese in these circumstances and its relevance for India .