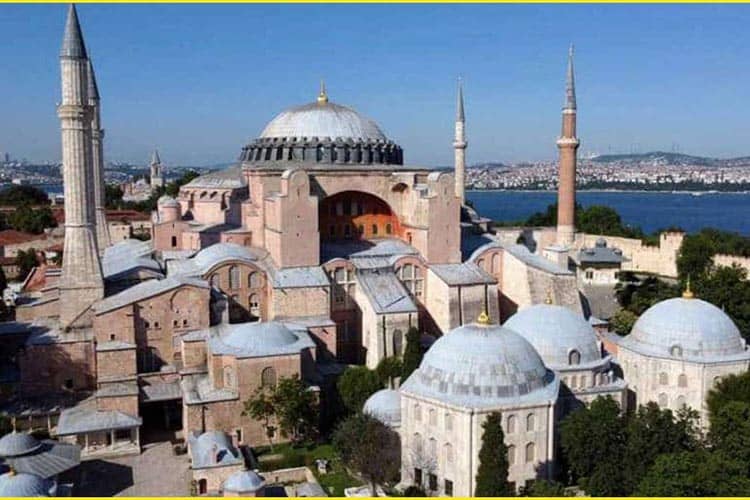 The world-famous Hagia Sophia museum in Istanbul, originally founded as a cathedral has been turned back into a mosque. Turkey’s President announced the decision after a court annulled the site’s museum status.

Built 1,500 years ago as an Orthodox Christian cathedral, Hagia Sophia was converted into a mosque after the Ottoman conquest in 1453. In 1934 it became a museum and is now a Unesco World Heritage site.

The President, who critics say is undermining Muslim-majority Turkey’s secular pillars, announced that Muslim prayers would begin at the UNESCO World Heritage site on June 24. Islamists in Turkey long called for it to be converted to a mosque but secular opposition members opposed the move. The proposal prompted criticism from religious and political leaders worldwide, who claim it was a bridge between two faiths, and a symbol of co-existence.

Hagia Sophia’s complex history began in the year 537 when Byzantine emperor Justinian built the huge church overlooking the Golden Horn harbour. With its huge dome, it was believed to be the world’s largest church and building. It remained in Byzantine hands for centuries apart from a brief moment in 1204 when Crusaders raided the city. In 1453, in a devastating blow to the Byzantines, Ottoman Sultan Mehmed II captured Istanbul (formerly known as Constantinople) and the victorious conqueror performed Friday prayers inside Hagia Sophia.

The Ottomans soon converted the building into a mosque, adding four minarets to the exterior and covering ornate Christian icons and gold mosaics with panels of Arabic religious calligraphy. Today Hagia Sophia is Turkey’s most popular tourist site, attracting more than 3.7 million visitors a year.