With the approval by the Union government for creation of the Ramgarh Vishdhari sanctuary, the Rajasthan government is hoping to develop a tiger corridor connecting three tiger reserves. 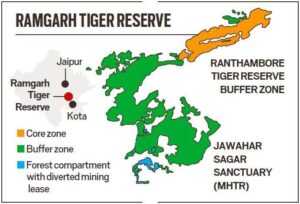 The National Tiger Conservation Authority in collaboration with the Wildlife Institute of India has published a document titled “Connecting Tiger Populations for Long-term Conservation”, which has mapped out 32 major corridors across the country, management interventions for which are operationalised through a Tiger Conservation Plan, mandated under section 38V of the Wildlife (Protection) Act, 1972.

The list of macro/landscape level tiger corridors are as under: