Prime Ministers of India and Bangladesh jointly inaugurated a railway link between Haldibari in India and Chilahati in Bangladesh during the PM level virtual bilateral summit.

The Haldibari – Chilahati rail link was operational till 1965. This was part of the Broad Gauge main route from Kolkata to Siliguri during partition.  Trains traveling to Assam and North Bengal continued to travel through the then East Pakistan territory even after partition. For example, a train from Sealdah to Siliguri used to enter East Pakistan territory from Darshana and exit using the Haldibari – Chilahati link.  However, the war of 1965 effectively cut off all the railway links between India and the then East Pakistan. So on the Eastern Sector of India partition of the railways thus happened in 1965.  So the importance of the reopening of this rail link can be well imagined.

About the Haldibari – Chilahati rail link 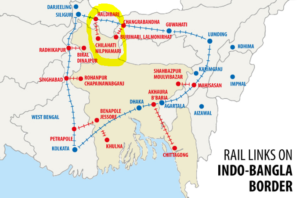 What are the other rail links that India-Bangladesh is connected with?