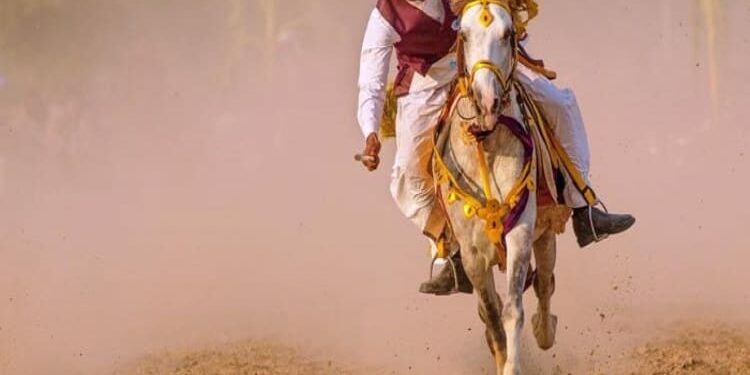 Tentpegging originated in the North West frontier of India and was taken up by the soldiers of the British Cavalry to use as practice for mounted warfare. The term ‘tentpegging’ is related to a battle tactic used by cavalry where a pre-dawn raid on an enemy camp would take place with riders severing or uprooting tent pegs, thus collapsing the tents on their sleeping occupants, and reaping havoc and terror in the camp. Today, the sport is practised in many countries, mainly by civilians and light horses. It involves a mounted horseman riding at a gallop, and using a sword or a lance to pierce, pick up and carry away a small ground target (a symbolic tent peg) or series of small ground targets.

Equestrian sports involve many types of horse competition from classical types such as Dressage to intense types like cross-country sports. These types of activities have been around for many years with the first Olympic event being held in 1912. Equestrian sports combine the beauty and power of the horse with the skilful manipulation of the course by the rider. The successful rider works in harmony with the horse to master the obstacles. Horses are trained and ridden for practical working purposes such as in police work or for controlling herd animals on a ranch. They are also used in competitive sports including, but not limited to dressage, endurance racing, eventing, reining, show jumping, tent pegging, vaulting, polo, horse racing, combined driving, and rodeo.