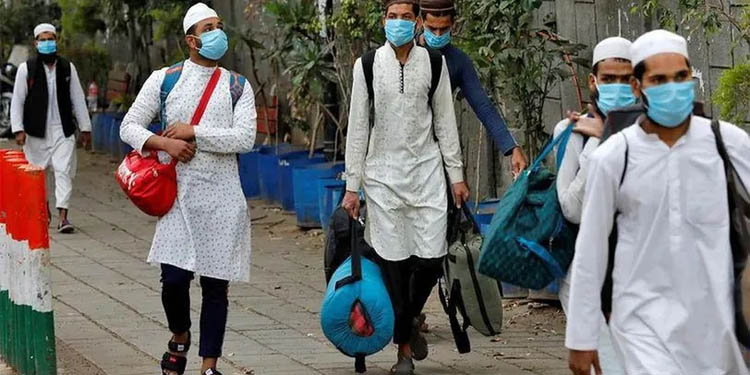 Five months after the government ordered a crackdown on all members of the Tablighi Jamaat present at their headquarters or ‘Markaz’ in New Delhi when a number of coronavirus cases were detected, the matter is becoming a diplomatic headache for the government. The action ordered by the Ministry of Home Affairs (MHA) in March included 2,550 foreigners from about 45 countries who belonged to the ultra orthodox Islamic sect; and several countries have expressed their concern to the Ministry of External Affairs (MEA) over the continued custody of their nationals in India.

Earlier, Bangladesh Foreign Secretary said he had raised the issue of about 173 Bangladeshis still being held in India when he met Foreign Secretary Harsh Shringla in Dhaka, asking him to expedite their return. According to diplomatic sources privy to the meeting, the Bangladesh government is particularly worried as many of them have run out of money, and may not be able to pay the fines of ₹5,000-­₹10,000 in order for them to leave. About 550 foreigners charged in the Tablighi cases had been able to leave thus far, while 1,030 have been allowed to leave by courts.

Indonesian and Malaysian officials, whose nationals make up the majority of cases, have also raised the issue of their nationals not being able to return both through their embassies and even at a recent India ­ASEAN meeting of senior officials, where such bilateral and consular matters are rarely raised. The U.S. Embassy has also said it had been in contact with the Government of India on the arrests of about six U.S. nationals. “The safety and security of American citizens is the Department of State’s highest priority. We are in contact with multiple U.S. citizens who were arrested by the Indian authorities in connection with the Tablighi Jamaat case,” a U.S. Embassy spokesperson said.

Tablighi Jamaat, an Islamic reformist group, had a large gathering of more than 3,000 people on 13 March in Nizamuddin with foreign nationals from Indonesia, Saudi Arabia, Kyrgyzstan, and Malaysia, a hot spot for the deadly virus. The Jamaat was also held responsible for having spread the virus to other nations in its February gathering in Malaysia. These members of the Tablighi Jamaat were charged under the Foreigners Act in India for indulging in activities that were incompatible with their visa status.