In news– Recently, the President of India felicitated the awardees of the cleanest cities of India at the ‘Swachh Amrit Mahotsav’ hosted as part of Swachh Bharat Mission-Urban 2.0 by the Ministry of Housing & Urban Affairs (MoHUA). 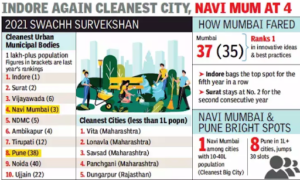