In news- Recently, the Haryana Legislative assembly has passed a resolution seeking completion of the Sutlej Yamuna Link (SYL) Canal, bringing back into focus the contentious issue of sharing of river waters between Haryana and Punjab. 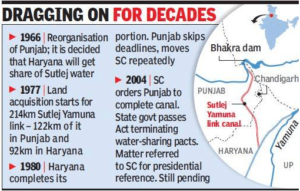