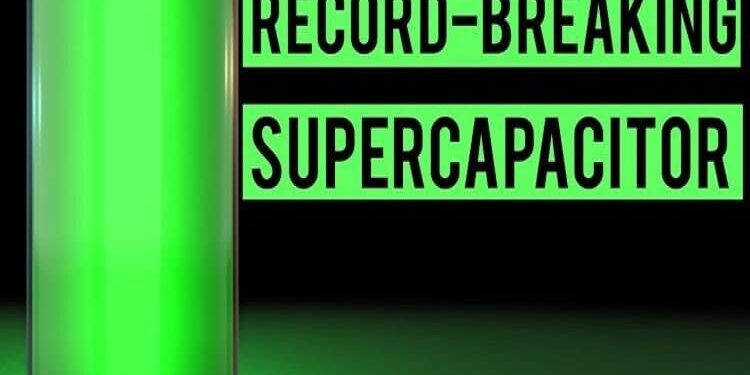 Scientists at the International Advanced Research Centre for Powder Metallurgy and New Materials (ARCI), an autonomous organization of the Department of Science and Technology, have developed a simple, low-cost, environmentally friendly, and sustainable supercapacitor electrode.

It is derived from industrial waste cotton which can be used as an energy harvester storage device. Further, for the first time, natural seawater is explored as an environmentally friendly, cost-effective, scalable, and alternative aqueous electrolyte, which may replace the existing aqueous-based electrolytes for the economic fabrication of supercapacitors.

Supercapacitor is a next-generation energy storage device that has received extensive research attention owing to advantages such as high power density, long durability, and ultrafast charging characteristics as compared to conventional capacitors and lithium-ion batteries (LIB). Among the four main components of supercapacitor electrode, electrolyte, separator, and the current collector, the first two are the pivotal components, which directly determine the electrochemical behaviour of the supercapacitors. The fabrication cost of electrode materials, as well as electrolytes, should be reduced because these two components account for a major portion of the device manufacturing cost.

In search of a cost-effective material for making affordable supercapacitor devices, scientists at ARCI have converted industrial waste cotton into highly porous carbon fibers by activation process and then utilised the porous carbon fibers to make high-performance supercapacitor electrodes. In the recent research published in Energy Technology, scientists at ARCI demonstrated the feasibility of using seawater as natural electrolyte for the fabrication of aqueous-based supercapacitor devices which shows great potential for practical implementation.The research team’s new, sustainable and green supercapacitor device shows great potential for practical application, and perhaps most importantly, the integrated solar cell with seawater-based supercapacitor as a low cost, eco-friendly, efficient and self-powering device. The successful demonstration of the device revealed that solar-powered supercapacitors can not only store the electrical energy but also overcome the drawbacks of the intermittent nature of the solar irradiation. Hence, the integrated solar cell with supercapacitor can be used as an energy harvester storage device due to their long cycle life and maintenance-free power supply.