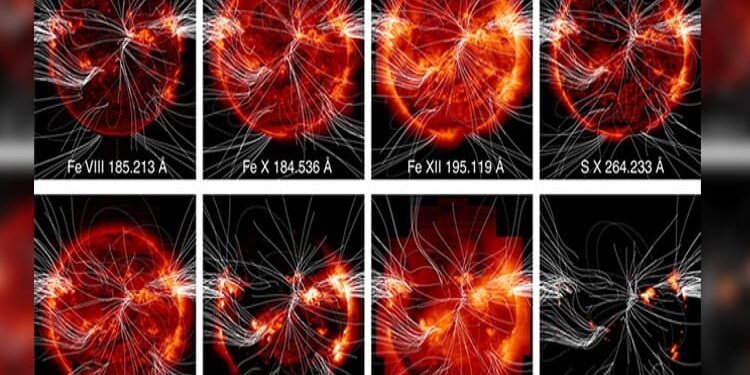 A significant advancement has been made by an international team of solar physicists led by those from Peking University, China, and National Center for Atmospheric Research of the United States. The group has measured the global magnetic field of the Sun’s corona, or outer atmosphere, for the very first time. This research has been published in the journal Science.

The Sun is a magnetized star, and its magnetic field plays a critical role in shaping the solar atmosphere. The magnetic field governs many aspects of the Sun’s behaviour, leading to an 11-year solar cycle, spectacular solar eruptions, and the heating of the hot gas (plasma) in the solar corona to millions of degrees celsius.

The scientists have used near-infrared imaging spectroscopy to determine the electron density and magnetohydrodynamic wave speed in the corona. By combining these measurements, they derived maps of the magnetic field throughout the entire observable corona. The method could potentially be used to produce routine magnetic field maps for the corona that are similar to those already available for the Sun’s surface.

There are two main puzzles about the Sun which this advancement will help address. First is the coronal heating problem. Though the core of the Sun is at a temperature of about 15 million degrees, its outer layer, the photosphere is a mere 5700 degrees hot. However, its corona or outer atmosphere, which stretches up to several million kilometres beyond its surface, is much, much hotter than the surface.

The other set of questions pertain to the mechanisms of eruptions of the Sun, such as solar flares and coronal mass ejections. These are driven by magnetic reconnections happening in the Sun’s corona. The team used the improved measurements of the Coronal Multi-channel Polarimeter (CoMP) and advanced data analysis to measure the coronal magnetic field. CoMP is an instrument operated by the High Altitude Observatory of the U.S. It is located at Mauna Loa Solar Observatory, near the summit of that volcano on the big island of Hawaii.