The Economic Survey stated that India’s sovereign credit rating doesn’t reflect its fundamentals. The survey called for an overhaul of sovereign rating methodology, saying that the fifth-largest economy can’t be BBB- rated.

In news: India’s Sovereign Credit Rating Does Not Reflect Its Fundamentals, Says Economic Survey 2021
Placing it in syllabus: Economy

What are Sovereign Credit Ratings?

Effect on Bond and Stock Markets:

A trend of Ratings of India: 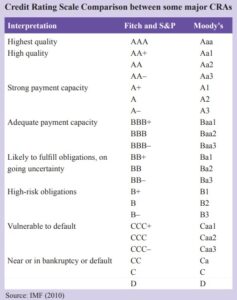 The Economic Survey Cited the following Researches for supporting its claims:

What should India do?

Larger engagements with Credit Rating Agencies for amending their methodology:

Mould your thought: What are Sovereign Credit Ratings? Discuss about the reasons for India’s sovereign credit rating not reflecting its fundamentals.