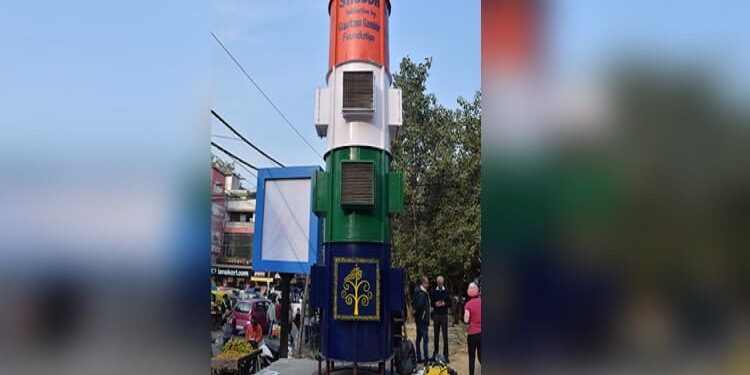 A smog tower is a structure designed to work as a large-scale air purifier, fitted with multiple layers of filters which trap fine dust particles suspended in the air as it passes through them. Air is drawn through fans installed at the top of the tower, passed through filters, and then released near the ground. The smog tower installed at Lajpat Nagar is capable of treating 6,00,000 cubic metres of air per day and can collect more than 75% of particulate matters (PM) 2.5 and 10.

The filters installed in the tower will use carbon nanofibres as a major component and will be fitted along its peripheries. The tower will focus on reducing particulate matter load. The project is a collaboration between the Indian Institute of Technology (IIT) Bombay, IIT-Delhi and the University of Minnesota, the latter having helped design a similar tower of over 100 metres in China’s Xi’an city. The Central Pollution Control Board (CPCB) will also be involved with the project.

China, which has been battling air pollution for years, has two smog towers, in its capital Beijing and in the northern city of Xi’an. The Xi’an tower is dubbed the world’s largest, and has reportedly brought down PM 2.5 by 19% in an area of around 6 sq km in its vicinity. The 100-metre (328 feet) high tower has produced 10 million cubic metres of clean air every day since its launch, and on severely polluted days, is able to bring down smog close to moderate levels.

Air pollution in the national capital has been an issue of concern for quite some time as Delhi and its suburbs have ranked among the most polluted cities in the world frequently since 2014, when the World Health Organisation (WHO) declared Delhi the most polluted city in the world. Pollution levels in Delhi increase dramatically during winter, on some days to nearly 10 times above the limits prescribed by WHO, posing a serious risk to vulnerable and also healthy populations.

This is largely because sources of emissions, construction work, industrial and vehicular pollution, in and around the city remain more or less consistent, but the situation is aggravated at the start of winter by smoke from stubble-burning in northwestern states, coupled with unfavourable meteorological conditions, such as calm winds, low temperatures, and fewer sunny days.