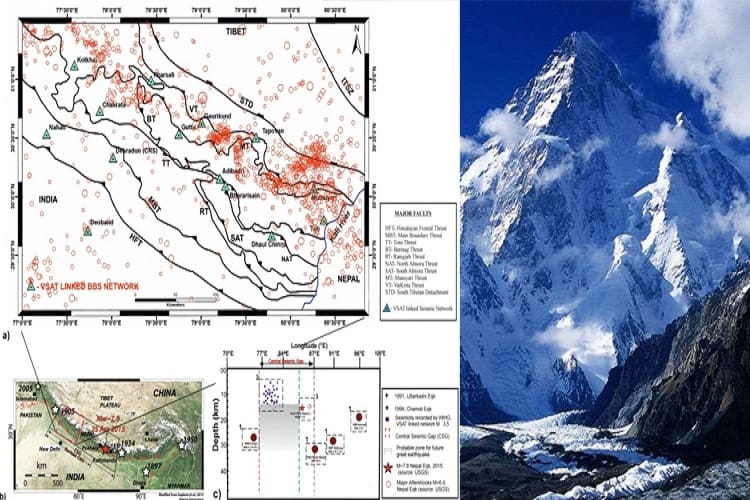 A study by the scientists from Wadia Institute of Himalayan Geology, Dehradun an autonomous institute under the Department of Science and Technology (DST) suggests that, unlike other parts of the western Himalaya, in Kumaun, partial melting of the crust is caused by activation of a tabular to sheet like, planar or curvi-planar zone composed of rocks that are more strained than rocks adjacent to the zone (major shear zones), instead of continuous zone of mid-crustal partial melts. The study also suggests that brittle deformation of these shear zones/ thrust planes may still control exhumation and seismicity in this region of the Himalaya.

Most research on seismic and landslide hazards in the Himalaya focus on geophysical and geomorphological characteristics. However, in many instances, the inherent cause of these natural disasters may lie deep in the subsurface and have geological implications like rock types, rheology, strain localization, and so on. Therefore, understanding the geodynamic scenario of a given section of Himalaya is as important as its seismic and geomorphic characteristics in following natural disasters.

The research, published in the Scientific journal ‘Lithos’, shows inverted metamorphism (condition in which higher-grade metamorphic rocks lie on top of lower-grade rocks), leading to partial melting of the Himalayan crust in two short spans of 27 to 32 and 22 to 26 million years. The study agrees with recent studies which suggest that one uniform mechanism cannot explain the evolution of the Himalayan metamorphic core. Activation of major thrusts and different mechanisms may operate at different cross-sections of this orogeny with channel flow (long-lasting flow of a weak, viscous crustal layer between relatively rigid yet deformable bounding crustal slabs) being dominant in the hinterland, and at ductile regime.

On the other hand, the critical taper, or wedge-like extrusion and forward propagation of thrust sheets, is more pronounced on the foreland and in the brittle regime. It has also been shown that the effect of channel flow is completely absent in various sections of the Himalaya. Therefore, different transects may have different mechanisms of exhumations (exposure of land surface that was formerly buried), thrust activity, and hence, different seismic and erosional characteristics.

The Kali River Valley of Kumaun marks the international border between India and Nepal. This region experiences intense seismic and landslide events. The scientists carried out an integrated field, metamorphic modelling and geochronological investigation in the remote higher parts of the Kali River Valley and found the absence of any ‘channel flow’ or a regional scale mid-crustal zone of partial melt. The most important prerequisite for channel flow mechanism is protracted period of partial melting (20 to 30 million years at least).

However, this study has shown short and distinct pulses of magmatism, which indicate events of strain localization and deformation along discreet shear zones. These shear zones, later in brittle regime, controlled exhumation along with the formation of new shear zones or thrusts that helped propagate and exhume the Himalayan core. Identification of these thrust zones on the basis of geological proxies help denote zones of seismicity and even landslides, as highly strained and crushed rocks present in thrust or fault zones are more susceptible to slope failure.