Recently, Turkey has launched a campaign to clean up sea snot  in the Sea of Marmara

What is sea snot?

‘Sea snot’ is marine mucilage that is formed when algae are overloaded with nutrients as a result of water pollution combined with the effects of climate change. Phytoplankton thrive in warmer and nutrient-rich waters, and then discharge the snotty substance.

What are the causes for this problem? 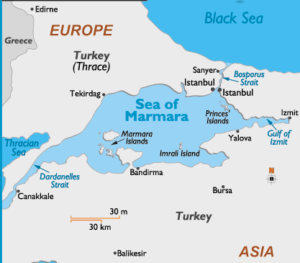 A ‘sea snot’ outbreak was first recorded in the country in 2007. Back then, it was also spotted in the Aegean Sea near Greece

Impact of the Sea Snot

Steps taken by Turkey in this regard