The geographical influence of Maoists has contracted to only 41 districts in the country, a sharp reduction from 96 such districts in 10 States in 2010, according to data provided by the Ministry of Home Affairs (MHA) to Chief Ministers and other officials at a meeting. In this context, it is prudent to learn the government initiatives related to LWE.

In news: Maoist influence down from 96 to 41 districts: Home Ministry
Placing it in syllabus: Security

From CPI(ML), several groups were formed and one of the groups was CPI(Maoist). Today, when we relate to Naxalites, they are majorly part of this group.

The Communist Party of India (Maoist) is a communist party in India that follows Maoism principles.

Currently, it has been designated as a terror outfit due to its philosophy, guerilla warfare, and terror-based activities. The party aims to topple the government of India using the “protracted people’s war”, a strategy defined by Mao Zedong.

CPI(Maoist) was regarded as a terror outfit under the Unlawful Activities (Prevention) Act in 2009.

Statistics on their reducing influence:

Data Provided by the Ministry of Home Affairs shows: 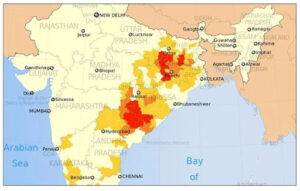 Causes for the decline:

The law and order approach

The law and order approach continues to be the key pillar of the Centre’s counterinsurgency strategy.

This is best exemplified by the deployment of 532 companies of central paramilitary forces in the affected states.

In 2006 the Central government under then Prime Minister Manmohan Singh for the first time issued a security blueprint to tackle the Maoist threat.

The blueprint was prominently featured in the government’s 14-Point Policy and subsequently took the form of a series of security-centric measures to address the growing Maoist movement.

The components of SAMADHAN strategy are as follows:

In order to holistically address the LWE problem in an effective manner, the Government has formulated a National Policy and Action Plan adopting a multi-pronged strategy in the areas of security, development, ensuring rights & entitlement of local communities etc.

The Ministry of Home Affairs had sanctioned construction of 400 Fortified Police Stations in 10 LWE affected States. Of these 399 of PSs have been completed.

Mould your thought: Why has the naxalite movement declining in India? What has been the Indian government’s strategy to counter Left Wing Extremism?