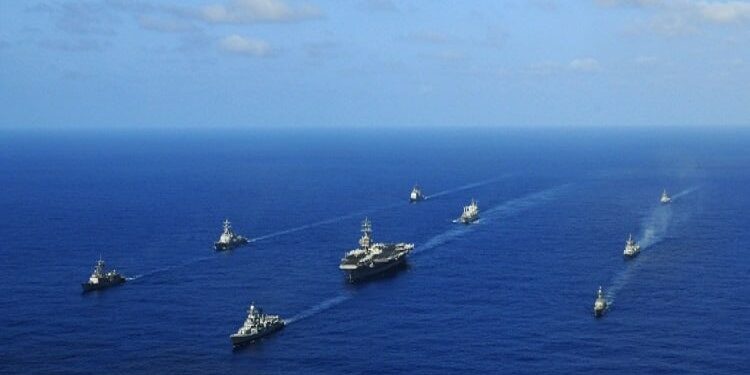 The recent escalation of tensions between India and China has reinvigorated discussions about the significance of the Quadrilateral Security Dialogue – popularly known as the ‘Quad’. A grouping of four countries, the Quad was initiated in 2007 to uphold strategic interests in the Indo-Pacific region and as a response to the growing Chinese clout. However, its origins go back to the time of the December 2004 Tsunami, when India undertook rescue and relief efforts for itself and the other affected neighbouring countries, and was joined by the US, Australia and Japan.

Now, any further discussion on the Quad cannot be complete without looking at the Malabar Naval Exercise. What began in 1992 as a bilateral exercise between India and the US, was expanded to occur annually, also taking in Japan as a permanent member in 2015. The year 2007 was a significant one, with the Malabar exercise seeing the participation of not just Japan, but also Australia and Singapore. The move irked China and the country promptly lodged its protest. Since then, Australia has been conspicuous by its absence in the exercise.

Soon after the 2007 exercise, the Quad grouping suffered a setback in 2008, with the withdrawal of Australia. But not just Australia, the US and India too have been blamed for undermining the group. It was only after ten years – in 2017 – that the Quad was brought back into existence, on the sidelines of the ASEAN summit in Manila with the ‘India-Australia-Japan-US’ dialogue. Significantly, this coming together took place in the wake of India’s standoff with China in Doklam.

With the Quad once again figuring prominently in the national security discourse, different perspectives have sprung up on what impact it can have on China and its ambitions in the near future. Till a year back, it was said that India was very cautious about doing anything that might upset China, especially since the Wuhan Summit. But, much has changed in the one year since, especially recently as Indo-China tensions escalated with the standoff along the Line of Actual Control (LAC) and culminated in the Galwan Valley clash in mid-June.

In fact, the Galwan clashes, along with China’s assertiveness in the South China Sea, are being touted as the tipping point towards the militarisation of the Quad. A key aspect here is how the Malabar Naval Exercise will now shape up, specifically whether or not Australia will be invited to participate in it. The 2007 exercise has been the only time till now that the country has taken part. Having expressed its interest in recent years to participate, Australia’s inclusion this time around would underscore the growing relevance and importance of the Quad, lending it further credence and stability after its shaky antecedents.