Tensions between the two Asian neighbours have steadily been escalating, ever since over 200 Chinese ships anchored themselves in waters close to the Whitsun Reef last week. The reef, called Julian Reef by Manila, is part of the Spratly Islands archipelago. Both China and the Philippines claim the reef as their territory, with Manila insisting that it falls within its exclusive economic zone. 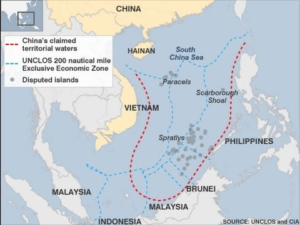 The islands of the South China Sea can be grouped into two island chains:

Importance of Sea for the countries:

The South China Sea is a region of tremendous economic and geostrategic importance. 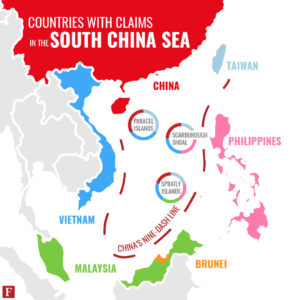 The South China Sea is an area of growing conflicts due to territorial claims by different countries:

Given below are the various claims raised by the different countries involved in the dispute:

In July 2016, an arbitration tribunal constituted under Annex VII of the United Nations Convention on the Law of the Sea (UNCLOS) ruled against the China’s maritime claims in Philippines v. China.

The Permanent Court of Arbitration ordered that:

The tribunal did not rule on the ownership of the islands or delimit maritime boundaries.

India’s position on the conflict:

Mould your thought: The South China Sea is a potentially volatile part of the Indo-Pacific. Elaborate.