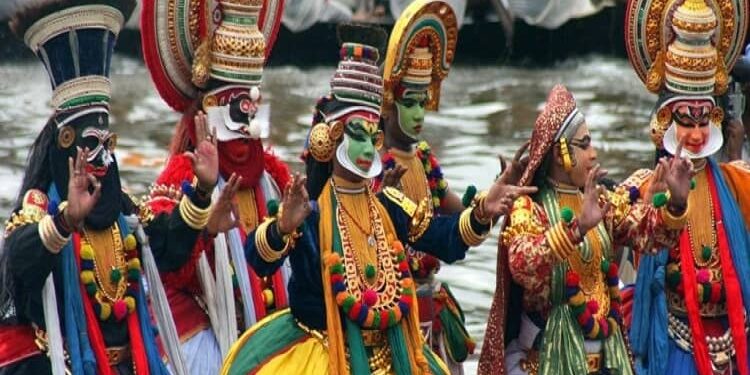 Onam is a traditional ten-day harvest festival that marks the homecoming of the mythical King Mahabali. It’s the biggest festival of the year in Kerala, in South India, and the whole state rejoices in celebrating it. It is the time of the year when Kerala is exhilarated with trumpets, drums, elephants, boat races, dances, art, music, floral decorations, lights, colours, rituals and the delicious Onasadya without which the celebrations are incomplete.

Onam occurs at the beginning of the month of Chingam, the first month of Malayalam calendar. In 2020, the most important day of Onam (known as Thiru Onam) is on August 31. Rituals commence approximately 10 days before Thiru Onam, on Atham (August 22, 2020). There are actually four days of Onam. First Onam will be on August 30 (the day before Thiru Onam), while fourth Onam will be on September 2. Onam festivities continue throughout these days, and even longer.

Vamanamoorthy Temple in Thrikkakara (also known as Thrikkakara Temple), northeast of Ernakulam near Kochi, is particularly associated with the Onam festival. The festival is believed to have originated at this temple. The temple is dedicated to Lord Vamana, the fifth incarnation of Lord Vishnu. Legend has it that Thrikkakara was the abode of good demon King Mahabali, who was a popular and generous ruler. His reign was considered to be the golden era of Kerala. However, the gods grew concerned about the king’s power and popularity. As a result, Lord Vamana is said to have sent King Mahabali to the underworld with his foot, and the temple is located at the spot where this happened.

The king asked to return to Kerala once a year to ensure that his people were still happy, well fed, and content. Lord Vamana granted this wish, and King Mahabali comes to visit his people and his land during Onam. It was only after the state of Kerala was formed in 1956 that Onam became the official festival with celebrations (such as the creation of pookalam floral arrangements) standardized across the state.

The Athachamayam festival at Tripunithura, near Ernakulam, kicks off Onam festival celebrations on Atham. Apparently, the Maharaja of Kochi used to march from Tripunithura to Thrikkakara Temple. This modern-day festival follows in his footsteps. It features a street parade with decorated elephants and floats, musicians, and various traditional Kerala art forms. At Thrikkakara Temple, there’s a special flag hoisting ceremony on Atham. Celebrations continue for the whole 10 days with cultural, music, and dance performances. A highlight is the grand procession, pakalpooram, on the day before Thiru Onam. The main deity, Vamana, is carried around the temple grounds on an elephant, followed by a group of caparisoned elephants.

In Thrissur, some rather unusual activities happen during the Onam festival. Masked and grass-clad Kummatti dance performers take to the streets to entertain people during the main four days of Onam. Men dressed up as tigers also perform the pulikkali folk dance in Thrissur a few days after Onam. Snake boat races are a big part of the Onam festival. People celebrate by buying new clothes, playing games, and swinging as well. Kerala Tourism hosts a week of special events during Onam. Much of Kerala’s culture is showcased during these special events in Trivandrum.