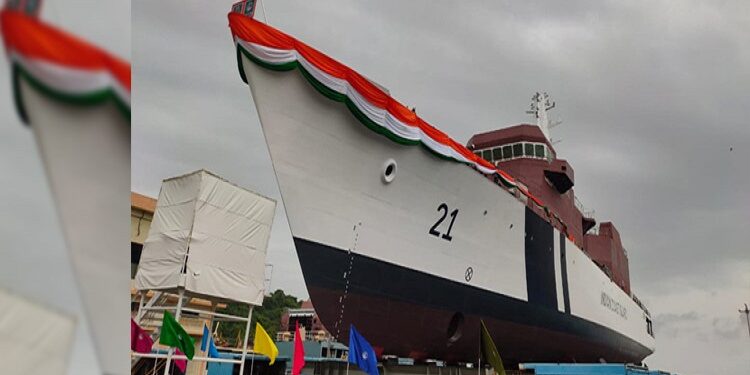 An Offshore Patrol Vessel (OPV) for the Indian Coast Guard was launched and re-christened as Indian Coast Guard Ship ‘Sarthak’. OPV Sarthak is the 4th in the series of five OPVs. It has been designed & built indigenously by M/s Goa Shipyard Limited (GSL) in line with the Prime Minister’s vision of ‘Make in India’.

The ship is fitted with state-of-the-art navigation and communication equipment, sensor and machinery. The 105 metre ship displaces approximately 2350 tons and is propelled by two 9100 KW diesel engines designed to attain a maximum speed of 26 knots, with an endurance of 6000 nautical miles. The sustenance and reach, coupled with the latest equipment and system, provides her the capability to perform the role of a command platform and undertake tasks to fulfill the coast guard charter.

The ship is designed to embark and carry a twin-engine helicopter, four high speed boats and one inflatable boat for swift boarding and search & rescue operations. The ship is also capable of carrying limited pollution response equipment to undertake oil spill pollution response at sea. The mere presence of Indian Coast Guard unit at sea serves dual objectives of “deterrence” and “reassurance”. It deters people with ill-intent and at the same time reassures the maritime community, who look up to Indian Coast Guard as “saviours at sea”, as they are aware that Indian Coast Guard will swiftly respond to any distress call or life-threatening situation at sea.

Indian Coast Guard has been a pioneer in inducting indigenous assets which has enabled it to remain operationally available throughout the year. The ship launched has about 70% indigenous content, thus providing the necessary fillip to the Indian shipbuilding industry and a giant leap towards achieving ‘Atmanirbar Bharat’. The ship will be deployed extensively for EEZ surveillance, coastal security and other duties as enshrined in the coast guard charter of duties, to safeguard the maritime interests of the nation.

In addition to the 5 OPV projects, 52 ships are at various stages of construction at different Indian shipyards and 16 Advanced Light Helicopters are under production at M/s HAL, Bengaluru, which will provide the added strength to the surveillance capabilities of Indian Coast Guard to deal with the dynamic maritime challenges.

True to its motto “Vayam Rakshamah” meaning “We Protect”, Indian Coast Guard has to its credit of saving about 9730 lives at sea, 12500 lives as part of assistance rendered to civil authorities and undertook 400 medical evacuations. Indian Coast Guard saves one life every second day at sea. The deterrence created by the Indian Coast Guard is not limited to the Indian waters, but collaboration with friendly littoral states as per provisions of bilateral cooperation agreements resulted in successful apprehension and seizure of drugs in Indian Ocean Region (IOR). The real time information sharing, close coordination and understanding between ICG and other International agencies has been the key success of these operations. The hawk eye vigil by the Indian Coast Guard of the Indian Exclusive Economic Zone (EEZ) has ensured seizure of Rs.6800 crore contraband.

The Prime Minister visited Defence Industrial Corridor in UP