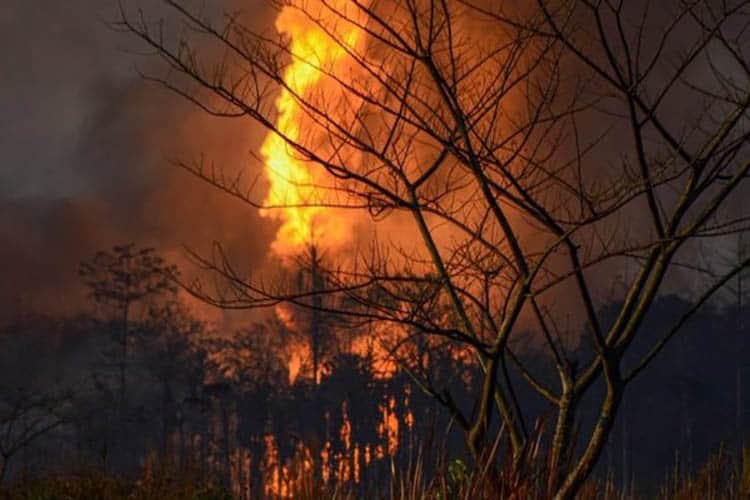 The National Green Tribunal (NGT) ordered for a high-level committee to look into the recent blowout at an Oil India Ltd (OIL) well in Baghjan, Assam. It also asked the public sector company to deposit Rs 25 crore for damages caused.

The committee will have the mandate to examine the cause and damage from the blowout that occurred. The oil-and-gas well, owned by OIL, at Upper Assam’s Baghjan village subsequently caught fire, after leaking for about a fortnight. Two OIL employees were killed in the fire that occurred a day after the company flew in well control experts from Alert Disaster Control Inc. Around 11,000 locals were evacuated and continue to live in relief camps. The Dibru-Saikhowa National Park and Maguri-Motapung wetland, less than a kilometre away from the site, are both under threat due to the accident, according to conservationists and experts.

The National Green Tribunal (NGT) has now directed the Environment Ministry, Oil India Limited (OIL) and two other entities to explain how the proposed drilling of seven oil wells in an eastern Assam national park was permitted. The other two respondents are the Assam State Pollution Control Board and the Assam State Biodiversity Board.

The NGT directive was based on a petition by Assam-based conservationists against the environmental clearance to OIL for drilling in the Dibru-Saikhowa National Park in violation of a Supreme Court order of September 2017. The NGT’s Eastern Zone Bench also took note of the petitioners’ contention that OIL did not carry out a biodiversity assessment study for the seven-well exploratory drilling project besides not conducting a public hearing as mandated by the Environment Impact Assessment (EIA) Notification of 2006.

The NGT has also ordered the formation of a committee to probe allegations of large-scale illegal coal mining by North Eastern Coalfields inside Dehing Patkai Elephant Reserve in Assam’s Tinsukia district.

Make PDF
Source: The Hindu & Down to Earth
Tags: Prelims