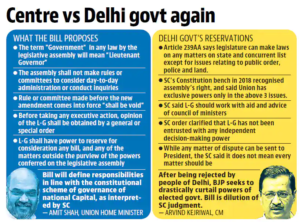 What was the verdict of the Supreme Court in 2018?

Effects of the proposed bill

As per the 2018 verdict of the Supreme Court,  the elected government of Delhi had stopped sending files on executive matters to the L-G before the implementation of any decision. It has been keeping the L-G abreast of all administrative developments, but not necessarily before implementing or executing any decision. But the amendment, if cleared, will force the elected government to take the L-G’s advice before taking any action on any cabinet decision.

Government of NCT of Delhi Act 1991