After the monsoon, work on India’s first dolphin research centre(NDRC) will begin in Patna.

NDRC would boost conservation efforts of dolphins and would provide an opportunity for in-depth research on dolphins including its changing behaviour, survival skills, food habits, cause of death and other aspects.

What is Project Dolphin? 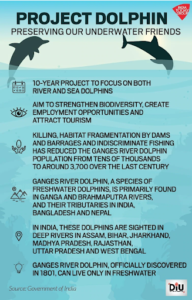