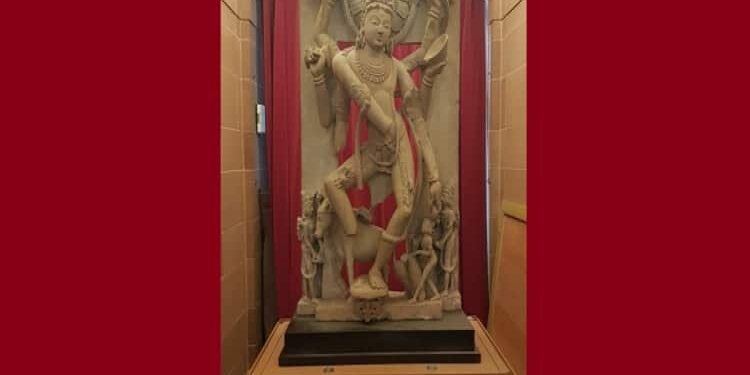 A long-pending case of idol theft finally saw an important development as Natesa, a rare sandstone idol in the 9th century Prathihara style of Rajasthan, is returning to the country after 22 years.

The Natesa icon, currently at the Indian High Commission, London, was originally from the Ghateswara Temple, Baroli, Rajasthan. Stolen in 1998, the icon has had a tortuous journey to the present. The suspected thieves had replaced it with a fake and smuggled the original out of the country. Eventually, a London collector J. Kasmin, who had possession of it in 2003, handed it over to the Indian High Commission at the time.

The sandstone Natesa figure stands tall at almost 4 ft. in a rare and brilliant depiction of Shiva in the late 9th century Prathihara style of Rajasthan. A beautiful depiction of Nandi is shown behind the right leg of the Natesa icon.

Based on an expose by Peter Watson in the book and the BBC programme titled Sotheby’s: The Inside Story (1997), the Rajasthan Police opened an investigation into one Vaman Ghiya’s Operation Blackhole. Ghiya was arrested in 2003, standing accused of having stolen 20,000 pieces of art and laundering them via a host of Swiss front companies and Sotheby’s, the international auction house. Ghiya was convicted in a trial court but eventually acquitted in 2014 by the Rajasthan High Court, partially because India had not repatriated even a single piece of art allegedly smuggled abroad by Ghiya.

In 1998, Kirit Mankodi, a retired archaeologist, was instrumental in the case and provided documents and photographs to prove that the idol in India was fake. A few archaeologists and enthusiasts behind the ‘India Pride Project’ have also taken consistent efforts for the restitution of the Natesa icon. The ASI and the Ministry of Culture should also use this restitution as a much-needed impetus to reopen the Vaman Ghiya case, resurrect Operation Blackhole, go after thousands of artefacts stolen since the 1960s by the Vaman Ghiya gang, and also appeal against his acquittal.

[India Pride Project (IPP) is a group of art enthusiasts who uses social media to identify stolen religious artefacts from Indian temples and secure their return. Co-founded in 2014 by two Singapore-based art enthusiasts, S. Vijay Kumar and Anuraag Saxena, it now has activists from all over the world].