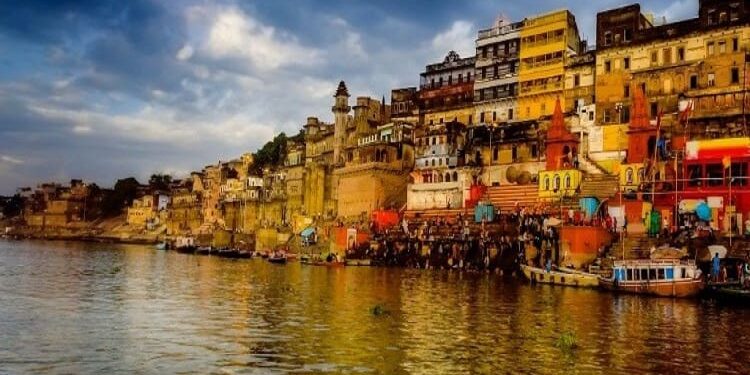 Namami Gange Program is an Integrated Conservation Mission, approved as a ‘Flagship Program’ by the Union Government in June 2014 with a budget outlay of Rs.20,000 Crore to accomplish the twin objectives of effective abatement of pollution, conservation and rejuvenation of National River Ganga.

. Work is under construction for creating sewerage capacity of 1187.33 (MLD).

. Hybrid annuity PPP model based two projects have been initiated for Jagjeetpur, Haridwar and Ramanna, Varanasi.

. 28 river front development projects and 33 entry level projects for construction, modernization and renovation of 182 ghats and 118 crematoria has been initiated.

. River surface cleaning for collection of floating solid waste from the surface of the ghats and river and its disposal are afoot and pushed into service at 11 locations.

. 5 biodiversity centers at Dehradun, Narora, Allahabad, Varanasi and Barrackpore have been developed for restoration of identified priority species.

. Forestry interventions for Ganga through Wildlife Institute of India, Central Inland Fisheries Research Institute and Centre for Environment Education has been initiated.

. Forestry interventions for Ganga has been executed as per the detailed project report prepared by Forest Research Institute, Dehradun for a period of 5 years (2016-2021) at project cost of Rs.2300 crores.

. Work has been commenced in 7 districts of Uttarakhand for medicinal plants.

.  A series of activities such as events, workshops, seminars and conferences and numerous IEC activities were organized to make a strong pitch for public outreach and community participation in the program.

. For wider publicity, the mass media such as TV/ Radio, print media advertisements, advertorials, featured articles and advertorials were published.

. Gange theme song was released widely and played on digital media to enhance the visibility of the program.

. Regulation and enforcement through regular and surprise inspections of grossly polluting industries (GPIs) is carried out for compliance verification against stipulated environmental norms.

. The GPIs are also inspected on an annual basis for compliance verification of the pollution norms and process modification, wherever required through third party technical institutes.

. Rs 578 crores has been released to the MoDWS for construction of toilets in 1674 Gram Panchayats of 5 Ganga Basin States.

. Consortium of 7 IITs have been engaged in the preparation of Ganga River basin Plan and 65 villages have been adopted by 13 IITs to develop as model villages.

. UNDP has been engaged as the executing agency for rural sanitation program and to develop Jharkhand as a model State at an estimated cost of Rs. 127 crore.