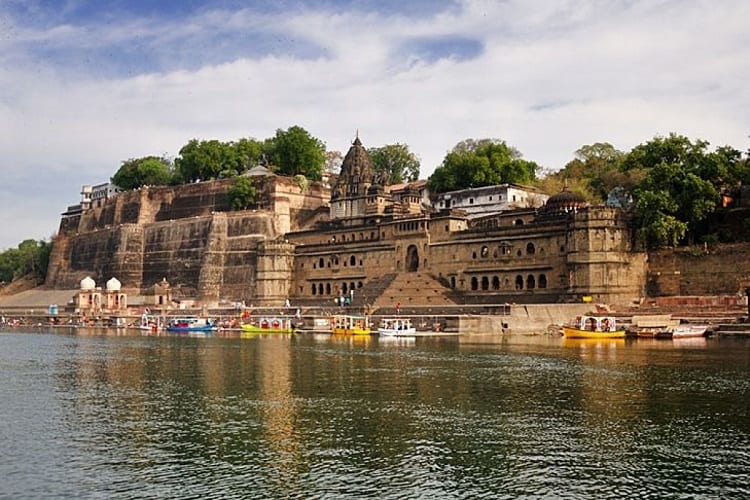 The first stop of the mystical triangle was Maheshwar or Mahishmati is one of serene and captivating destinations of Madhya Pradesh with historical significance which is 90 kms away from Indore city. The city got its name after Lord Shiva/ Maheshwara, it also finds a mention in the epics Ramayana and Mahabharatha. The Town lies on the north bank of the Narmada River. It was the capital of Malwa during the Maratha Holkar reign till 6 January 1818, when the capital was shifted to Indore by Malhar Rao Holkar III.

In the late eighteenth century, Maheshwar served as the capital of the great Maratha queen Rajmata Ahilya Devi Holkar. She embellished the city with many buildings and public works, and it is home to her palace, as well as numerous temples, a fort, and riverfront ghats. The queen is also known for her simplicity, this is evident to present day through Rajwada or the Royal Residence where the queen used to meet her people, a two-storied building.

Omkareshwar has 33 deities and 108 impressive shivling in divine form and this is the only Jyotirlingawhich is situated on the north bank of Narmada. Omkareshwar is a spiritual town in Madhya Pradesh, 78kms away from Indore. A visit to Omkareshwar temple is incomplete without visiting Mamleshwar temple. It is also believed that Lord Shiva comes here to rest everyday considering that a special aarti called Shayan aarti is performed everyday at 8:30pm in the evening and arranges a game of dice for Lord Shiva and Goddess Parvathi.

Mandu located in Dhar district of State of Madhya Pradesh is also known by the name of Mandavgarh, Shadiabad (City of Joy). It is about 98km. away from Indore and at an elevation of 633 meters. The Fort in Mandu is spread over an area of 47 sqkm and the fort wall is 64 kms. Mandu is mainly known for the love story of Sultan Baz Bahadur and Rani Roopmati. The RewaKund at Mandu was built for her. It is a reservoir constructed for the purpose of supplying water to Rani Roopmati’s pavilion. The reservoir is situated below the pavilion and is considered an architectural marvel. Baz Bahadur’s Palace built in the 16th-century is famous for its large courtyards encompassed by large halls and high terraces. It is situated below Roopmati’s Pavilion and can be seen from the pavilion.