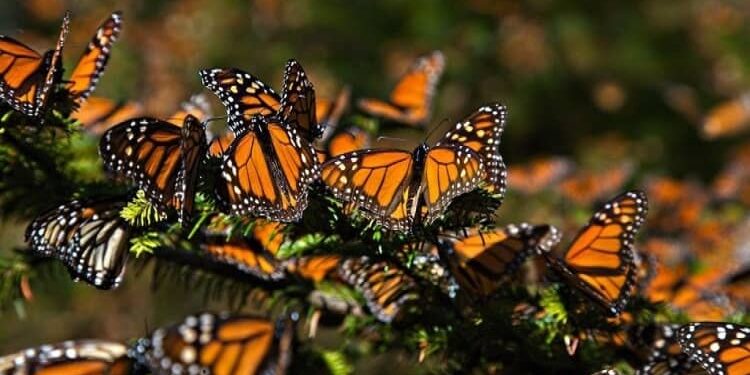 In a departure from the past, the annual migration of butterflies from the hill ranges of the Eastern Ghats towards the Western Ghats is an early phenomenon this year.  Usually, butterfly migration in south India begins in October-November, with the onset of the northeast monsoon, from the plains to the Ghats, and in April­-June, just before the advent of the southwest monsoon, from the Ghats to the plains.

This year, the first migratory sighting was recorded in the Parambikulam Tiger Reserve in Palakkad district by forest watchers on July 14. Later, butterfly enthusiasts in Salem, Erode, Tiruppur, Coimbatore and the Nilgiris observed their movement in large numbers from August 21, which is still continuing. Butterfly migration has also been recorded in Mysuru, Bengaluru, Kolar and Coorg districts in Karnataka. The migration started early after a gap of eight years. The Eastern Ghats complex of the Yercaud hills (Shevaroy hills), Pachamalai, Kolli hills, Kalvarayan hills are the major originating places for the migrating species.

The change in rainfall pattern and a considerable increase in the number of sunny days may be the major reasons for the earlier migration. Ferns Nature Conservation Society (FNCS) is studying butterfly migration in South India. The forest department initiates to develop this into a comprehensive study.

There are different reasons why butterflies will migrate toward other places. Since butterflies are cold blooded, they simply can’t handle the colder weather, so have to travel somewhere warmer. They also need to stay where their food source is – if it’s winter and there are no flowers, they can not stay there. If weather changing is not a problem, like for the butterflies in the tropics, butterflies will often migrate away in order to establish new colonies. The reason for this is that if they stay in one place for too long, the butterfly caterpillars will consume all of their food in that one area, and so the butterflies will starve to death. So migrating to new places will ensure their survival and their food source.