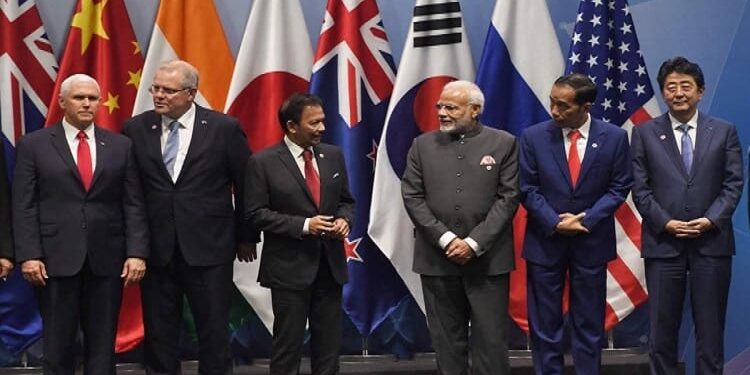 Rise of China has become a major cause of concern for a rules-based order. All four QUAD nations find a common ground of being the democratic nations and common interests of unhindered maritime trade and security. And Beijing views the Quad as an attempt to contain its rise in Indo-Pacific region.

In news: The foreign ministers of Australia, India, Japan, and the United States recently met in Tokyo for a “Quad” ministerial meeting.
Placing it in syllabus: International relations – regional groupings

About the meeting and decisions taken:

The differences which stood out include- 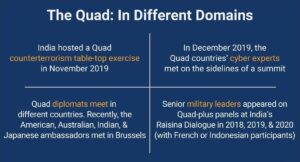 India alone is not the victim of Beijing’s visible expansionism. China and Japan are at loggerheads over the Senkaku islands. Other ASEAN countries are quite literally on China’s radar on account of rival claims over maritime boundaries in the resource-rich South China Sea. After the COVID-19 outbreak, China’s relations with Australia have gone precipitously south. The regional turbulence in the Indo-Pacific has naturally drawn in the United States, which under the Trump administration has virtually declared a new Cold War with China.

Under these circumstances, the bonding of powerful democracies can change the economic and military balance of power vis-a-vis China. It aids in upholding a rules-based order and respect for international law in the strategically important region. It helps in creating a free, open, prosperous and inclusive Indo-Pacific region that serves the long-term interests of all countries in the region and of the world at large. Economically, the strategy is regarded as an answer to China’s Belt and Road Initiative (BRI), which is establishing a China-centric trade route.

Countering Chinese hard and soft power intrusions, especially through its BRI is expensive for India. To accomplish this herculean task against a formidable and implacable rival, India has to embrace the Indo-Pacific Quad. With India, located right at the centre of the Indo-Pacific geopolitical imagination, it can realize the vision of a ‘broader Asia’ that can extend its influence away from geographical boundaries. 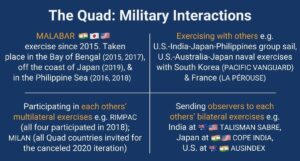 India is the only Quad member not already tied in a treaty alliance with the others. India also is the only country in the Quad that shares a land boundary with China and how the militarization of the Quad in Indo-Pacific waters would alleviate the territorial threat it faces is still unclear.