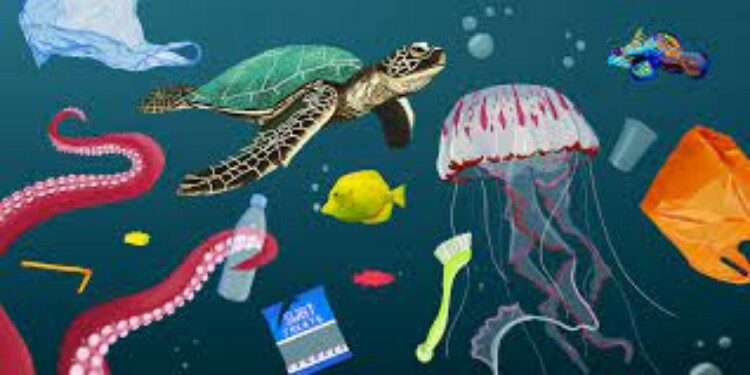 The extensive use of plastic in India has reached a critical point, which should concern everyone. Over the last ten years we have produced more plastic than during the whole of the last century. Plastic pollution threatens food safety and quality, human health, coastal tourism, and contributes to climate change. There is an urgent need to explore the use of existing legally binding international agreements to address marine plastic pollution.

In news: How India can face the tidal wave of marine plastic
Placing it in syllabus: Environment

What is Marine Plastic Pollution?

Plastic is a synthetic organic polymer made from petroleum with properties ideally suited for a wide variety of applications, including packaging, building and construction, household and sports equipment, vehicles, electronics and agriculture.

Plastic is cheap, lightweight, strong and malleable. Over 300 million tons of plastic are produced every year, half of which is used to design single-use items such as shopping bags, cups and straws.

Marine Plastic pollution is a transboundary challenge that is rooted in unsustainable production and consumption patterns. They are poor solid waste management and lack of infrastructure, lack of adequate legal and policy frameworks and poor enforcement, including on interregional cross-border trade of plastic waste, and a lack of financial resources.

Source of Plastic pollution in oceans

The Central Pollution Control Board’s (CPCB) Annual Report on Implementing the Plastic Garbage Rules, 2016, is the only regular estimate of the quantum of plastic waste generated in India. According to it, the waste generated in 2018-19 was 3,360,043 tonnes per year (roughly 9,200 tonnes per day).

But according to a 2017 science breakthroughs study, only nine per cent of all plastic waste has ever been recycled.

Approximately 12 percent has been burnt, while the remaining 79 per cent has accumulated in landfills. Plastic waste is blocking our sewers, threatening marine life and generating health risks for residents in landfills or the natural environment.

Impacts on food and health:

The problem of marine plastic pollution can — and must — be tackled from a range of perspectives. Some of the solutions are as follows:

Legal efforts have been made at the international and national levels to address marine pollution.  The most important are:

However, compliance with these laws is still poor, partly due to limited financial resources to enforce them. Existing international legally binding instruments should be further explored to address plastic pollution.

Mould your thought: Why is Marine Plastic pollution a critical issue in the current times? What can be done to address this issue effectively?