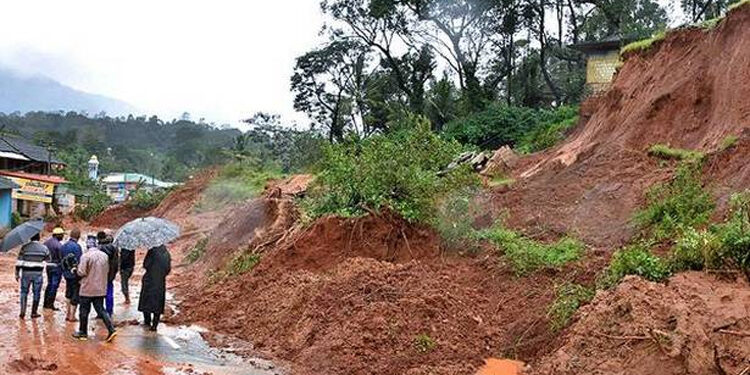 In India, the mountainous and hilly areas in 16 States and in two Union Territories in the Himalayan region, sub-Himalayan parts of the northeast and in Western Ghats are landslide-prone. These areas comprise about 12.6% or 4.2 lakh sq km of India’s landmass spreading over 159 districts.

Geology, road and railway projects, and unplanned quarrying and construction can turn landslide-prone areas in India fatal. Integration of the national landslide susceptibility mapping (NLSM) with infrastructure development and planning in hilly or mountainous areas in the country can help avoid disasters and human fatalities.

The GSI has marked a slew of human activities besides geological factors such as weathering of underlying bedrock and impact of earthquakes that make 4.2 lakh sq. km. hilly or mountainous areas in India landslide-prone. Such activities include unplanned excavation of slopes for road and railway projects, rampant dumping of slope-excavated material, quarrying, mining and building construction besides modification of and encroachment on natural drainage systems.

During June-July this year, the GSI documented 20 landslides in Arunachal Pradesh, Assam, Meghalaya and Sikkim that killed at least 36 people. Most of these fatalities were reported from Assam, where 51 died in landslides compared to 64 drowned during the monsoon months in 2016 followed by 26 in the next three years. Preliminary analysis of the documented landslides has indicated that antecedent heavy rainfall is the triggering factor in all the cases. These are fast-tracked by an overwhelming imprint of human activities on vulnerable slopes.

The GSI has so far completed 85% of its NLSM project covering 3.5 lakh sq. km. of landslide-prone areas and 61% of this geographic information system-based map is in the public domain. The NLSM database has 52,146 mapped landslide polygon data and 24,184 landslide point data for use by the States and UTs concerned. Polygon data refers to the shape of the entire influence area of a landslide-prone area mapped from very high-resolution remote sensing inputs while point data pertain to landslides validated during fieldwork through the collection of geo-scientific attributes per landslide.

The NLSM database is the most effective fundamental geo-information tool on a medium scale, which should be used and integrated with the infrastructure development and planning in hilly or mountainous areas of India. The landslide susceptibility map spatially categorises the landslide-prone areas into high, moderate or low degrees of proneness, a very vital geo-information for use in safe land-use zoning regulations and landslide mitigation. If implemented properly, it can suitably avoid many new landslides that are caused heavily by manmade actions.