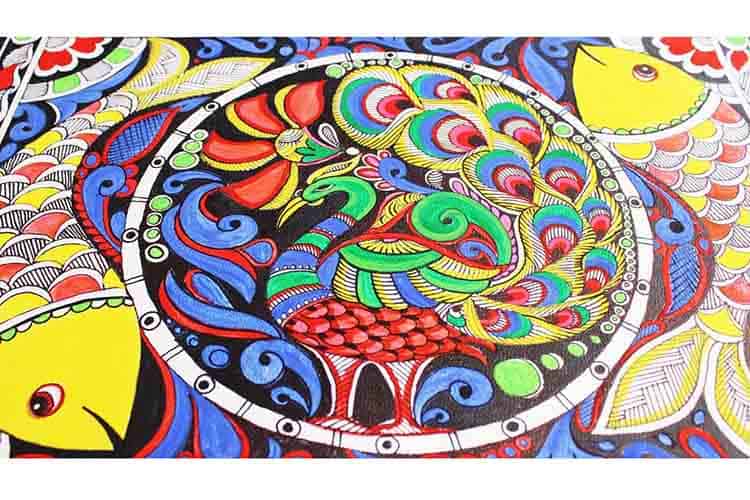 Madhubani painting is one of the many famous Indian art forms. As it is practiced in the Mithila region of Bihar and Nepal, it is called Mithila or Madhubani art. Often characterized by complex geometrical patterns, these paintings are known for representing ritual content for particular occasions, including festivals, religious rituals, etc. The colors used in Madhubani paintings are usually derived from plants and other natural sources. These colors are often bright and pigments like lampblack and ochre are used to create black and brown respectively. Instead of contemporary brushes, objects like twigs, matchsticks and even fingers are used to create the paintings.

Some of the initial references to the Madhubani painting can be found in the Hindu epic Ramayana when King Janaka, Sita’s father, asks his painters to create Madhubani paintings for his daughter’s wedding. The knowledge was passed down from generation to generation and the paintings began to adorn the houses of the region. The women of the village practiced these paintings on the walls of their respective home. Their paintings often illustrated their thoughts, hopes and dreams.

Over time, Madhubani paintings became a part of festivities and special events like weddings. Slowly, this art attracted connoisseurs of art as many contemporary Indian artists took the art on the global stage. The traditional base of plastered mud wall was soon replaced by handmade paper, cloth and canvas. Since the paintings have been confined to a limited geographical range, the themes as well as the style are more or less, the same.

Madhubani paintings were initially practiced by different sects of people and hence the paintings were categorized into five different styles, such as Tantrik, Kohbar, Bharni, Godna, Katchni. But today, these five different styles have been merged by contemporary artists. The themes used in these paintings often revolve around Hindu deities like Krishna, Rama, Lakshmi, Shiva, Durga and Saraswati. Also, heavenly bodies like the Sun and the Moon often form the centerpiece of Madhubani paintings.

One can also find paintings based on the scenes from the royal courts and social events like weddings. The usage of geometrical patterns is pretty much apparent in these paintings. The fact that these complex mathematical patterns were used in Madhubani paintings makes them more intriguing and special.

While the paintings are largely made using powdered rice, colors derived from turmeric, pollen, pigments, indigo, various flowers, sandalwood, and leaves of various plants and trees, etc. Also, many natural sources are combined and are processed to obtain the desired colors. The colors are often prepared by the artists themselves. If the artists come across empty spaces even after completing the painting, they usually fill up those empty spaces with the motifs of flowers, animals, birds and geometrical patterns. A double line is usually drawn as the border.