Loan moratorium and interest on interest

The Supreme Court has recently said that the Centre’s affidavit on waiving off “interest on interest” on loans up to Rs 2 crore under the moratorium was not satisfactory. In news: The Centre is ready to waive interest on interest during the moratorium.
Placing it in syllabus: Indian economy

The Centre and the RBI had argued against any waiver of interest on interest on the grounds that it would be against the interests of other stakeholders, like depositors and would be unfair to those who had paid their dues. Now based on the recommendations of an expert committee headed by former CAG Rajiv Mehrishi, the centre has reversed its stance. 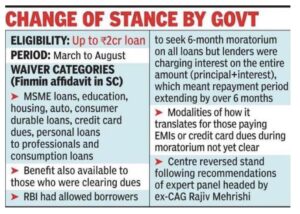 The SC has asked the government and the RBI to file an additional affidavit within a week and the matter is to be heard next on October 13.

The conditions stipulated by the RBI include:

The move is expected to give additional relief to small enterprises, over and above the government guarantee-backed emergency credit scheme for them. The one-time restructuring of corporate and personal debt will help alleviate the stress faced by borrowers and ensure the soundness of the banking system.