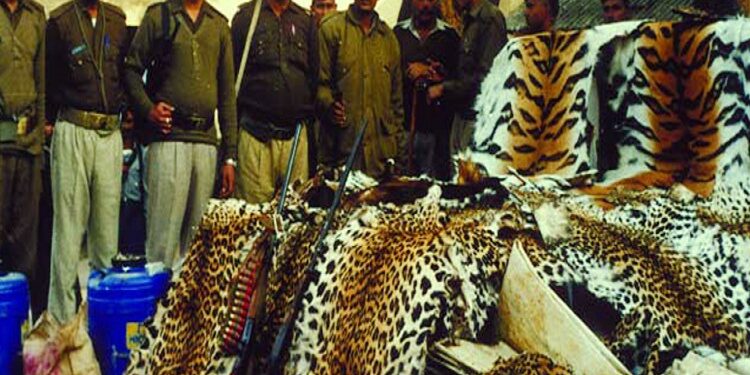 A recent study by TRAFFIC India on the seizure and mortality of ‘common leopards’ (Panthera pardus fusca) revealed that of the total of 747 leopard deaths between 2015-2019 in India, 596 were linked to illegal wildlife trade and activities related to poaching. TRAFFIC is a leading NGO working globally on trade in wild animals and plants in the context of biodiversity conservation and sustainable development. It operates as a program division of WWF in India.

Incidents of wildlife poaching in India have more than doubled during the COVID-19 lockdown with 88 animals being killed for meat and trade during this time compared to 35 in the pre-lockdown days in February, a new study has revealed. Reports of poaching incidences for consumption and local trade have more than doubled during lockdown although there was no evidence of stockpiling of wildlife products for future trade. The study indicates that despite consistent efforts by law enforcement agencies, wild animal populations in India are under additional threat during the lockdown period.

When the country shut down to contain the COVID-19 outbreak, wildlife conservation took a hit. Funding dried up, fewer personnel were on the ground and tighter interstate borders made rescue efforts difficult. The records indicate that 140 leopards were killed by poachers and their carcasses were recovered from the forest areas, whereas body parts belonging to the equivalent of 456 leopards were seized during various operations by law enforcement agencies during the study period. The last formal census on India’s leopards was conducted in 2014, which estimated the population between 12,000 and 14,000. The results of a recent census of leopard sightings are likely to be released soon by the Wildlife Institute of India.

The paper titled ‘‘SPOTTED’ in Illegal Wildlife Trade: A Peek into Ongoing Poaching and Illegal Trade of Leopards in India’ also said that the highest numbers of poaching incidents were reported from the States of Uttarakhand and Maharashtra. During the period 2015 to 2019, there were more than 140 cases of seizures of leopard body parts in Uttarakhand, and about 19 incidents where the deaths of these cats could be directly linked to poaching. More than 40 cases of seizure of leopard body parts and 16 cases of poaching were recorded from Maharashtra between 2015 to 2019.

Among all the derivatives found in illegal wildlife trade, skin remained the most in-demand product, accounting for 69% of all seizures, while derivatives like claws, teeth and bones were also traded. It is also believed that bones of the leopard are possibly traded as tiger bones as they have a larger international demand for traditional medicines.

Threatened by increasing habitat destruction and human-wildlife conflict around the country arising out of shrinking habitats and illegal trade, experts suggest that more emphasis should be given to the conservation of leopards. The conservation status of common leopards was elevated from ‘Near Threatened’ in 2008 to ‘Vulnerable’ in 2015 by the International Union of Conservation of Nature (IUCN).