In news–Government has recently refuted media claims of a decrease in the Labour Force Participation Rate (LFPR) by citing official data.

What is the Labour Force Participation Rate (LFPR)? 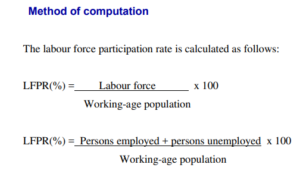 Following are the various sources that give data on job creation in India: