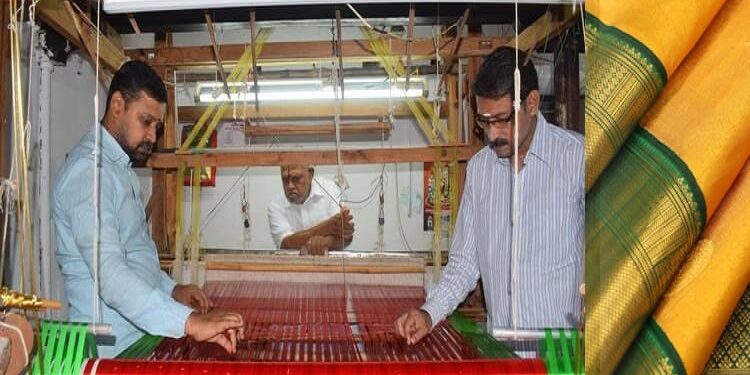 An eighth generation Thanjavur-based weavers have been actively involved in revival and rejuvenation of korvai silk saris since 2009. The brothers belong to the eighth generation of heritage silk weaving Sourastrian community, and the loom was founded in 1885 in Thanjavur by their ancestors. Years ago, most weavers quit weaving and took odd jobs as the income from weaving was meagre. As a result, this highly specialised technique languished and was on the verge of extinction.

Korvai is an ancient and complex technique of weaving, practiced in Kanchipuram. The word ‘korvai’ in Tamil means ‘in sync’. Korvai is used to interlace the borders with the body of the sari. The contrasting colours of the borders in the weaving of the weft are interlinked with the body of the weft with each throw of the shuttle. Two weavers are required, one to operate the threads for the central portion and another to operate the border colours. Since borders often appear on both sides of the saris, each Korvai Kanjivaram sari requires three shuttles.

The elaborate pallus are also linked to the main body of the sari using a special interlinking weave known as ‘pitni’. In the hands of the skilled craftsman, this pitni looks like one continuous weave. Korvai is also distinguished by its motifs, often inspired by the beautiful carvings found in the temples of Kanchipuram. The hallmark of the Korvai is its vivid colours and contrasting borders. A pearly-white sari with a bold maroon border or a grass-green sari with a tangerine border are stunning results of the Korvai.