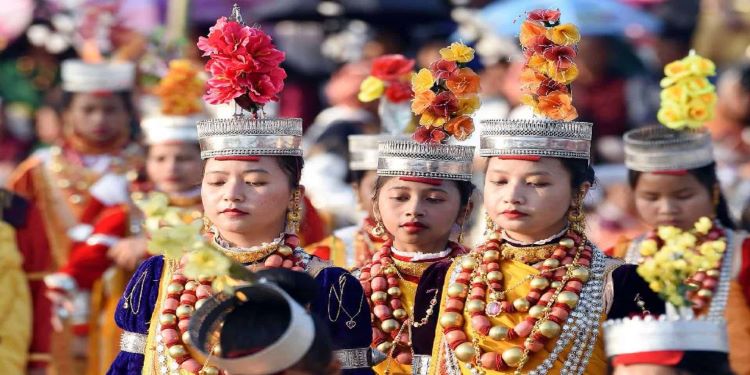 Location:The Khasis inhabit the eastern part of Meghalaya, in the Khasi and Jaintia Hills. Khasis residing in Jaintia hills are now better known as Jaintias. They are also called Pnars.The Khasis occupying the northern lowlands and foothills are generally called Bhois. The Khasi people are an indigenous ethnic group of Meghalaya in north-eastern India with a significant population in the bordering state of Assam, and in certain parts of Bangladesh.The Khasi people form the majority of the population of the eastern part of Meghalaya, and is the state’s largest community, with around 48% of the population of Meghalaya.

Constitutional Status: Under the Constitution of India, the Khasis have been granted the status of Scheduled Tribe.

Dress: The traditional Khasi male dress is “Jymphong” or a longish sleeveless coat without collar, fastened by thongs in front. Now, the Khasis have adopted the western dress. The Khasi traditional female dress is rather elaborate with several pieces of cloth, giving the body a cylindrical shape.

Food & Drinks: The staple food of Khasis is rice. They also take fish and meat. Use of rice-beer is a must for every ceremonial and religious occasion.

Social Structure: They are among the few Austroasiatic-speaking peoples in South Asia. The Khasis, the Jaintias and the Garos have a matrilineal society. Earlier in the conservative Jaintia non-Christian families, however, the father only visits the family in the night and is not responsible for the maintenance of the family.

Marriage: Marriage within a clan is a taboo. Rings or betel-nut bags are exchanged between the bride and the bridegroom to complete the union. In the Christian families, however, marriage is purely a civil contract.

Religion: The Khasis are now mostly Christians. But before that, they believed in a Supreme Being, The Creator – U Blei Nongthaw and under Him, there were several deities of water and of mountains and also of other natural objects.