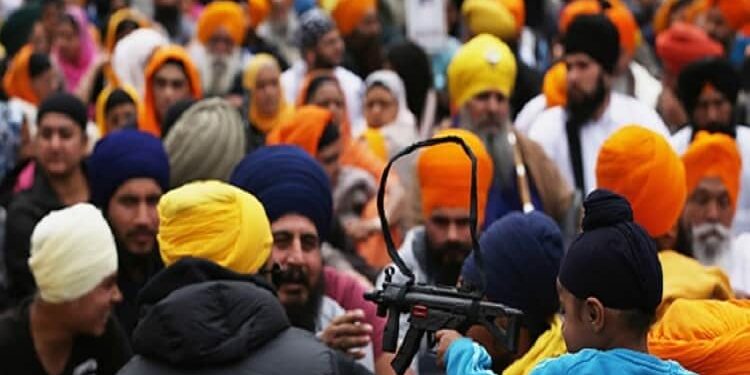 The British government has asserted that it does not support the Khalistan movement in the UK or any activity against India. Many organisations and Gurdwaras have been working in the UK under the umbrella organisation, Sikh Federation UK and also independently to further a case of Khalistan. Many questions have been raised in the past about the funding and support to such separatist organisations. It has been alleged that they are funded by Pakistan’s intelligence agency ISI and every time there is a protest, people are transported in hired vehicles, fed and paid to take part in the protests.

The Khalistan movement is a Sikh nationalist movement that wants to create an independent country for Sikh people inside the current Punjab region of Pakistan and the North-Western India. The fight for a separate Sikh state owes its origins to the Punjabi Suba Movement. The Akali Dal, a Sikh-dominated political party sought to create a separate Sikh Suba or Province. When the States Reorganization Commission, constituted to assess the demand for separate states by linguistic groups, made its recommendations, it rejected the Akali Dal’s demand. But after a series of violent protests, the Indira Gandhi government relented in 1966. The state was trifurcated into Punjabi-majority Punjab, Hindi-majority Haryana and the Union Territory of Chandigarh. Some hilly regions of the state were merged into Himachal Pradesh.

With the Anandpur Sahib resolution, the Akalis tried to create the perception that Sikh religion could not be separated from Sikh politics. While its original authors may have abandoned its stated aims, the Anandpur Sahib resolution found an admirer in Jarnail Singh Bhindranwale, a religious scholar who’d been travelling across Punjab advocating a return to the Khalsa or a more orthodox form of Sikhism. He targeted Hindus and ‘modernised’ Sikhs, who cut their hair and consumed alcohol in equal measure. If the Akalis were a moderate faction espousing Sikh pride and politics, Bhindranwale represented the extremist view that among other things called for a separate state.