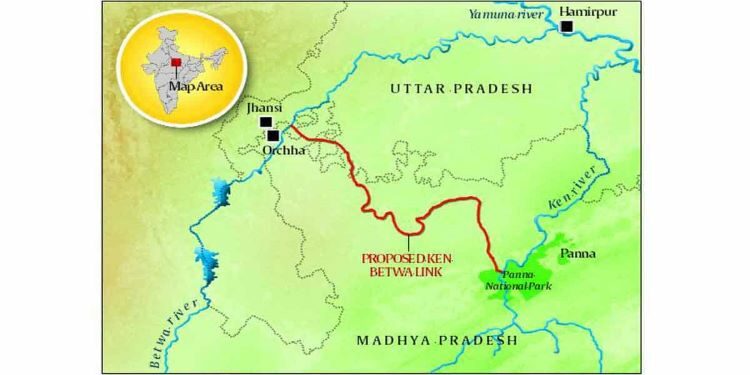 In news : Recently, a memorandum of agreement has been signed between the Union Minister of Jal Shakti and the chief ministers of Madhya Pradesh and Uttar Pradesh to implement the Ken-Betwa Link Project

Phases of the project:

This project consists of two phases:

As per the written reply given by Minister of State for Jal Shakti Rattan Lal Kataria, out of the 6,017 ha of forest area coming under submergence of Daudhan dam of Ken Betwa Link Project, 4,206 ha of area lies within the core tiger habitat of Panna Tiger Reserve.

Following are the various clearances required for the interlinking of river projects:

The idea of transferring surplus water from a river to water-deficit area was mooted by the then Union Irrigation Minister (earlier the Jal Shakti Ministry was known as Ministry of Irrigation) Dr K L Rao in 1970sThe former Minister suggested construction of a National Water Grid for transferring water from water-rich areas to water-deficit areas. Similarly, Captain Dinshaw J Dastur proposed the Garland Canal to redistribute water from one area to another.However, the government did not pursue these two ideas further. It was in August, 1980 that the Ministry of Irrigation prepared a National Perspective Plan (NPP) for water resources development envisaging inter basin water transfer in the country.

It comprised of two components: