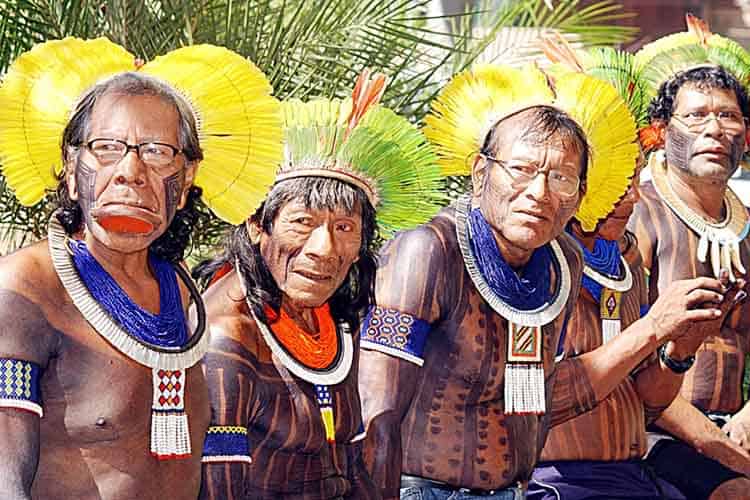 In the 1980s, a young chief of Brazil’s Kayapó people emerged from the Amazon forest to campaign on behalf of the Xingu River and its forests. He not only saved the Xingu and its forests, but spent the rest of his life leading local, regional, and global efforts to protect other parts of the Amazon-the lungs of the planet. Unfortunately his life ended this year, when he and several other Kayapó elders succumbed to COVID-19.

The Kayapo people are a tribe of about 8,638 indigenous (native) peoples who live in the Amazon rainforest. They like to call themselves Mebengokre, meaning ‘the men from the water place’. The Kayapo tribe live alongside the Xingu River in several scattered villages ranging in population from one hundred to one thousand people. They have small hills scattered around their land and the area is criss-crossed by river valleys. Their villages are typically made up of about a dozen huts. A centrally located hut serves as a meeting place for village men to discuss community issues.

Their appearance is highly decorative and colourful, using: face and body paint, beads and feathers. The Kayapo believe their ancestors learnt how to live communally from social insects such as bees, which is why mothers and children paint each other’s bodies with patterns that look like animal or insect markings, including those of bees. Men wear the flamboyant Kayapo headdress with its outwardly radiating feathers (representing the universe) at ceremonies to mark the changing of seasons as well as rites of passage.

The Kayapo people use shifting cultivation where land is farmed for a few years, after which the people move to a new area. New farmland is cleared (using cutting and burning) and the old farm is allowed to lie fallow and replenish itself. Crops they grow include: sweet potatoes, yams and papaya. Since the initial arrival of Europeans around 500 years ago, the Kayapo have experienced forced migration further west into the rainforests. They have lost: land, habitat and they have also suffered from the introduction of diseases from the outsiders.