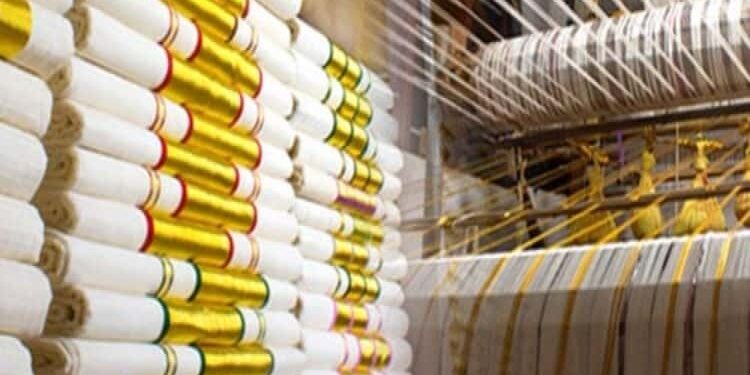 Kerala Saree, commonly known as the Kasavu saree, is the traditional wear for women in Kerala. These sarees can be further classified as Kerala Set-Saree, Set-Mundu, Neriyath, Kavani, Kasava etc. These are crafted mainly at Kuthampully of the Thrissur district in Kerala. The term kasavu actually refers to the zari used in the border of the Kerala sari and not the sari itself. It is the name of a material used in the manufacturing process.

Kasavu saree is crafted mainly by the Devanga Chettiar community which belongs to Mysore. The artisans of this community had shifted their looms to Kuthampully years ago, for weaving for the Raja of the Kochi Palace. About 2000 people of this community have continued this traditional craft. Kerala or Kasavu saree is a single piece of cloth, whereas traditional mundum neriyathum is of a two-piece fabric. It is the cultural costume of the Malayali community, embellished with the beauty and charm of the golden borders and coupled with the plain white mundum neriyathum. It is believed that the mundum neriyathum was draped with the neriyathu that was tucked inside the blouse.

The coloured strip at the border is referred to as Kara. Previously the colour of the blouse determined the age and the marital status of the woman. The young spinster girls wore the green colour, and the married middle-aged mothers adorned red colour. Kasavu (golden border) is generally pure gold, copper coated or artificial thread. It is found that mostly the simple line designs adorn the bottom of the saree whereas the small peacock or temple artforms are ornamented on the pallu.

Today, the kerala kasavu saree has become the tradition and trademark highly practised in Kerala worn especially during the auspicious occasions. The golden borders i.e the kasavu has been replaced by different kinds and colors of Zari and the designs which represent the tradition and culture have been transformed in a reshmi style to enhance the appeal of the sari. The designs woven on the kasavu saree revealed the cultural and traditional aspect of women of kerala.