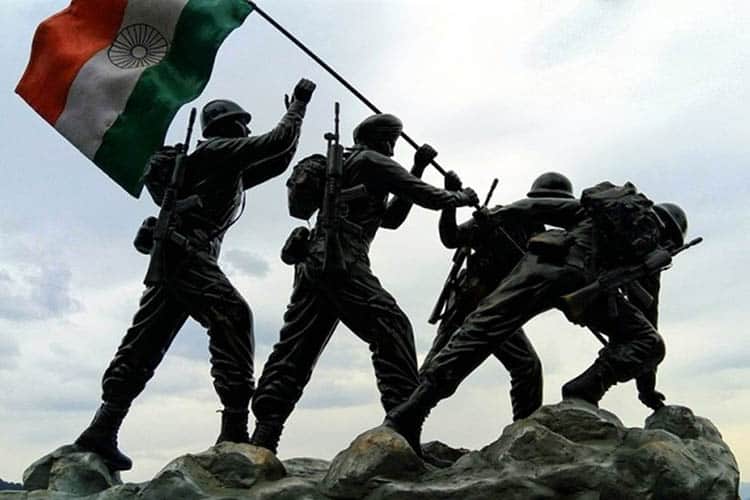 Kargil Vijay Diwas is commemorated on 26 July every year as a saga of gallantry and valour of a battle fought in the most inhospitable terrain in the world in the area of Kargil-Drass Sector of Ladakh. On this day the Indian Armed Forces braving most difficult terrain, battling extreme weather conditions fought valiantly on the steep slopes of icy peaks with grit and valour thus defeating the evil designs of the enemy. The Kargil War or as referred – Operation Vijay was fought at an altitude of approximately 16,000 feet, wherein 1,042 Pakistani soldiers lost their lives and 527 Indian soldiers were martyred.

The war took place between May and July of 1999 in Jammu and Kashmir’s Kargil district. It began with the infiltration of both Pakistani troops and terrorists into Indian territory. The infiltrators positioned themselves in key locations that gave them a strategic advantage during the start of the conflict. Based on information from local shepherds, the Indian Army was able to ascertain the points of incursion and launch “Operation Vijay“.

Because the Pakistani soldiers and terrorists had positioned themselves at higher altitudes, it gave them an advantage in combat, as they could fire down at advancing Indian troops. Pakistan shot down two Indian fighter jets while another fighter jet crashed during the operation. Pakistan asked the US to intervene, but then President Bill Clinton declined to do so until Pakistani troops were withdrawn from the Line of Control. As Pakistani troops withdrew, the Indian armed forces attacked the rest of the outposts, managing to get back the last of them by July 26.

Pakistan initially denied any role in the conflict, saying India was facing off with “Kashmiri freedom fighters.” However, it later awarded its soldiers medals for the conflict, removing any doubt of its involvement. This restraint shown by India in not escalating the conflict into a full-blown war, in fact, put tremendous international pressure led by the US on Pakistan to finally withdraw from the Kargil heights.

IAF’s own offensive air operations under Operation Safed Sagar, in support of the ongoing Army operations on the ground, began on May 26. But all throughout the conflict, the Indian MiG-21, MiG-27 and Mirage-2000 fighters fired rockets and missiles at the fortified enemy positions only from India’s side of the LoC. The conditions were tough with regard to the operational limitations on rough terrains at a height of 18,000 ft, coupled with the short notice on which IAF was called for action.

With just 25% of the total strike force of the Western Air Command, Pakistan Army and its air force received serious blows to their morale to the extent that PAF refused to support Pak Army. In fact, even when the PAF F-16s tried to be supported by Combat Air Patrols, IAF’s MiG-29s forced them to retreat. IAF inflicted serious damage to Pak intruder posts, material and supply dumps after exhaustive recce.