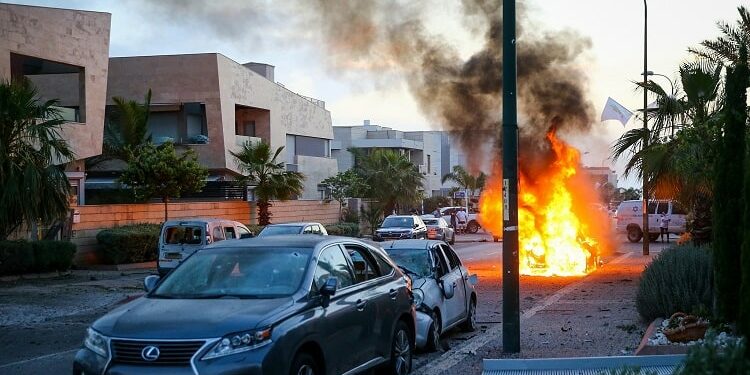 Palestinian militants fired 12 rockets at Israel from the Gaza Strip overnight, nine of which were intercepted, and Israel responded with three airstrikes on targets linked to the territory’s militant Hamas rulers, the Israeli military said. It was the most serious exchange of fire along the Gaza frontier in months, but there were no reports of casualties.

In recent weeks, groups affiliated with Hamas have launched incendiary balloons into Israel, igniting farmland in a bid to pressure Israel to ease the blockade it imposed on Gaza when the Islamic militants seized power in 2007. The rocket fire marks a significant escalation. Israel and Hamas have fought three wars and several smaller battles over the last 13 years. Neither side is believed to be seeking war, but any casualties could ignite a wider conflict.

Israel has closed Gaza’s only commercial crossing, causing the territory’s sole power plant to shut down for lack of fuel and limiting the territory’s 2 million residents to around four hours of electricity a day. Israel has also banned fishing in Gaza’s coastal waters, measures it says are in response to the incendiary balloons. Egyptian mediators were in Gaza earlier in the week to try and shore up an informal truce but left without announcing any progress. Israel has allowed the Gulf nation of Qatar to provide hundreds of millions of dollars in aid to Gaza in recent years to keep the economy from collapsing and preserve calm.

It was the most serious cross-border exchange since February, when the smaller Islamic Jihad militant group fired around 80 rockets into Israel after one of its fighters was killed near the border while allegedly planting explosives. Israel struck dozens of targets across the territory. The Gaza Strip has a population of two million people, more than half of whom live in poverty, according to the World Bank. The Palestinian territory has been under a devastating Israeli blockade since 2007. Egypt has acted to calm repeated flare-ups in recent years to prevent any repetition of the three wars Israel and Hamas have fought since 2008. Israel captured Gaza from Egypt in the 1967 Six-Day War, but unilaterally pulled out its army and evacuated its settlements in 2005. Israel, however, continues to control much of Gaza’s borders, with the rest under Egyptian control.

History of the Conflict

After Hamas took control of the Gaza Strip in 2007, Israel declared the Gaza Strip under Hamas a hostile entity and approved a series of sanctions that included power cuts, heavily restricted imports, and border closures. Hamas attacks on Israel continued, as did Israeli attacks on the Gaza Strip. After months of negotiations, in June 2008 Israel and Hamas agreed to implement a truce scheduled to last six months; however, the truce was threatened shortly thereafter as each accused the other of violations, which escalated in the last months of the agreement. On December 19 the truce officially expired amid accusations of violations on both sides.