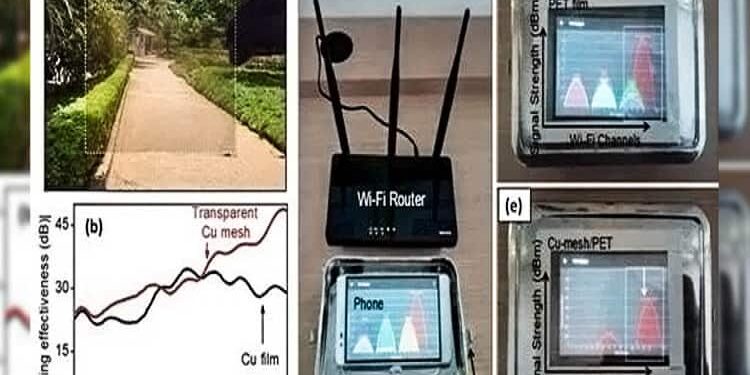 Scientists from Centre for Nano and Soft Matter Sciences (CeNS), Bengaluru, an autonomous institute of the Department of Science & Technology, Govt. of India have fabricated the transparent and flexible EMI shields made of metal meshes using the crack templating method via spray coating which is pioneered in their laboratory.

Scientists have achieved a feat by designing a metal mesh structure instead of continuous film on desired transparent substrates to make it a transparent shield for electromagnetic interference (EMI). The invisible shield can be used in various military stealth applications and can cover electromagnetic wave emitter or absorber devices without compromising their aesthetics. The CeNS team has developed a copper metal mesh on polyethylene terephthalate (PET) sheet as its substrate, which exhibits a visible transmittance (T), a parameter of visible transparency of about 85%.

These transparent and flexible EMI shields made of metal mesh coatings on desired transparent substrate they have developed through their research published in the journal ‘Bulletin of Materials Science’ showed remarkably high values for total EMI shielding (SET), with the average value being ~ 41 dB over a wide spectral range of the Ku band (12 to 18 GHz).