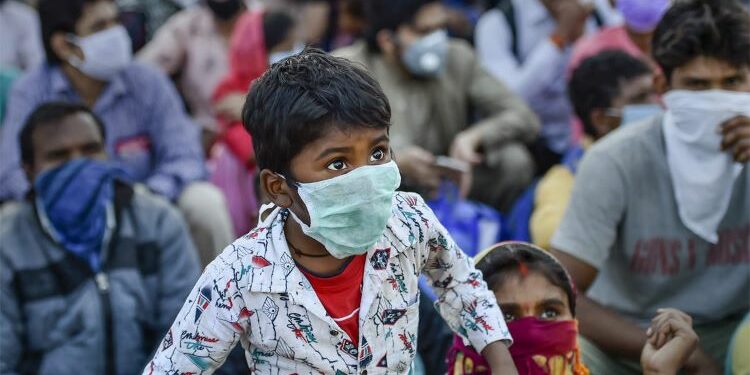 Manifest pedagogy: The sudden lockdown of the nation brought migrant livelihoods to a halt. The migrant crisis brought to the fore the unfulfilled obligations of the government to restore dignified work to its most vulnerable citizens in an era of economic liberalisation.

In news: Internal migrants are most affected due to COVID -19

Placing it in syllabus: Migration

Urbanization: An increase in the demand for labour in urban areas and better wages increase migration. The pull factors of better job facilities, good salary, more income, medical and educational facilities are attracting the rural people to move to the cities. The push factors of no job facilities, low salary, less income, drought, less medical and education compel people towards cities.

Marriage: Marriage is an important social factor for migration, from one rural area to another rural or urban area, especially in case of females.

Education: Due to lack of educational facilities in rural areas, people migrate to the urban areas for better academic opportunities. In the 2011 census, about 1.77% people migrated for education.

Lack of security: Political disturbances and inter-ethnic conflicts is also a reason for internal migration.

Environmental and disaster induced factors force people to move from rural to urban areas due to gradual deterioration of changing environmental conditions. There can also be forced displacement due to reasons such as developmental projects.

Documentation and Identity: Proving their identity is one of the core issues impoverished migrants face when they arrive in a new place. Identity documentation that is authenticated by the state ensures that a person has a secure citizenship status and can benefit from the rights and protections that the state provides.

The basic problem of establishing identity results in a loss of access to entitlements and social services. The issue of lack of access to education for children of migrants further aggravates the intergenerational transmission of poverty.

Housing: Labor demand in cities and the resulting rural-to-urban migration creates greater pressures to accommodate more people. Unaffordable rents in slums force migrants to live at their workplaces (such as construction sites), shop pavements or in open areas in the city. This further perpetuates their vulnerability to harassment by the police and other local authorities.

Limited Access to Formal Financial Services: Since migrants do not possess permissible proofs of identity and residence, they fail to satisfy the Know Your Customer (KYC) norms as stipulated by the Indian banking regulations. They are thus unable to open bank accounts in cities which has implications on the savings and remittance behaviors of migrant workers.

Political Exclusion: In a state of continuous drift, migrant workers are deprived of many opportunities to exercise their political rights. As migrants are not entitled to vote outside of their place of origin, some are simply unable to cast their votes.

Rampant Exploitation: Migration flows are mediated by an elaborate chain of contractors and middlemen who perform the critical function of sourcing and recruiting workers. These networks largely operate in the informal economy.

Migrants, completely dependent on the middlemen for information, end up working in low-end, low-value, hard, and risky manual labor and are constantly subject to exploitation with little or no opportunity for legal recourse.

As migrants are dispersed throughout a vast urban or rural canvas, it inhibits their potential to organize themselves in formal or informal ways. This further weakens their bargaining power in terms of wages, benefits, and working conditions.

Inter-State Migrant Workmen (Regulation of Employment and Conditions of Service) Act of 1979:

The Interstate Migrant Workers (Regulation of Employment and Conditions of Service) Amendment Bill, 2011 proposed to make this Act gender neutral by amending its title and replacing the word ‘workman and workmen’ by the words ‘worker and workers’ respectively.

Trends and patterns of internal migration:

WEF’s report on ‘Migration and Cities’: