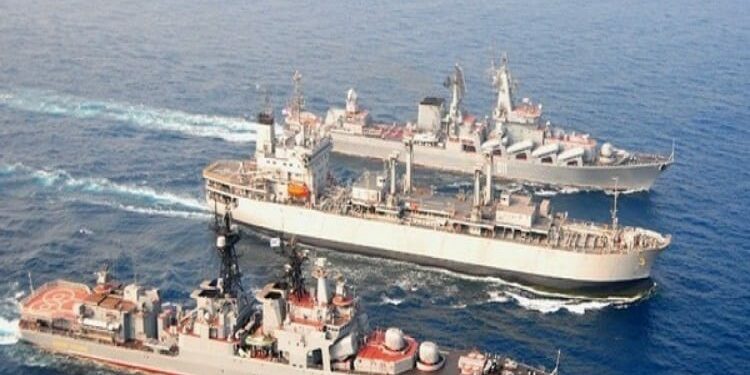 Indra Navy-2020, the joint exercise between Indian and Russia Navy earlier planned in Vladivostok (Russia) has been postponed due to Covid-19 pandemic situation. Sources said Russian Navy has instead proposed conducting a non-contact, at sea only Passage Exercise (PASSEX), to maintain the continuity engagements between the two Navies.

Russian Navy ships Admiral Vinogradov (Destroyer), Admiral Tributs (Destroyer) and Boris Butoma (Tanker) with integral helicopters will be visiting the port of Hambantota (Sri Lanka) from August 31- September 3 before proceeding to Russia. According to sources, Indra Navy-2020 is planned as PASSEX on September 4-5 during the passage of Russian Navy ships from Hambantota to Malacca Straits in the Bay of Bengal.

Indian Navy will deploy ships Ranvijay (Destroyer), Sahyadri (Frigate), Kiltan (Corvette) and Shakti (Tanker) with integrated Helicopters. Sources said as part of Indra Navy 2020, maritime operations such as flying, gun firing on surface and aerial targets, tracking exercises and replenishment at sea approaches (RASAPS) are planned. India-Russia (INDRA) Exercises between the Army, Navy and Air Force of the two countries have been held since 2005. Joint Tri-Services Exercises “INDRA” are also being held once in two years since 2017. The last INDRA Tri-Services Exercise was held in India in December 2019.

Indra Navy-2020 will once again showcase the level of friendship, trust and interoperability between Indian Navy and the Russian Navy, as India is keen to develop a partnership with Russia in the Indo-Pacific region.