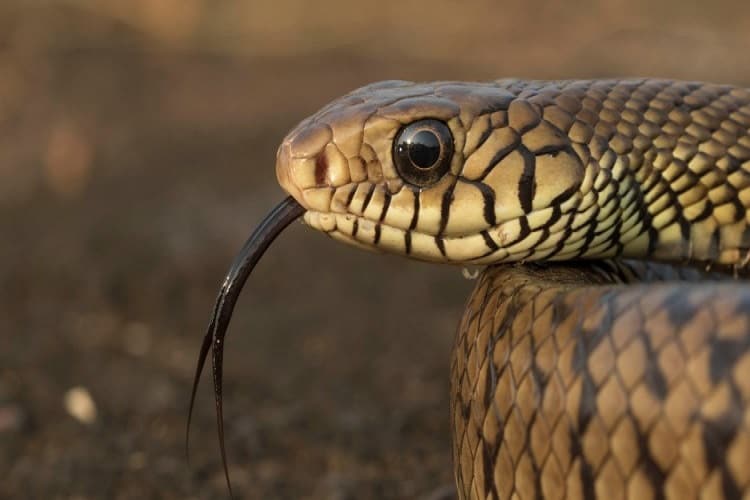 Throughout history, be it the legend of Jormungand, the Viking sea snake in Norse Mythology, or the Naga in Hindu mythology, the portrayal of snakes has always misled people into believing that they were terrifying evil creatures out to hurt us. On the contrary, they do us a huge service. The Indian Rat Snake for example, is also called the farmer’s friend. It helps rid fields of rodents and does the same in urban settlements as well.

Most snakes in India are non-venomous, but like any other animal, they too have ways to defend themselves. The Indian Rat Snake (Ptyas mucosa), which can sometimes grow to over 6 feet in length, is one such. They are not very aggressive by nature, but if threatened by humans or animals bigger than them, their first response is to try and escape. If cornered though, they inflate their throat and release a growl, before striking vigorously.

This behaviour or adaptation of inflating their throat and growling may be seen as mimicking a cobra to look more intimidating. It may also be one of the reasons for humans mistaking them for the venomous cobra. In fact the Indian Rat Snake is food for the Spectacled Cobra, along with a few other snakes like the Indian Rock Python, and some predatory birds.

Popularly known as Dhaman, the Indian Rat Snake is widely distributed across South and Southeast Asia, where it adapts quickly to a variety of habitats: arid land, open fields, farmland, coastal regions, freshwater or brackish water wetlands. They are also found in rat holes and termite mounds. They come in a great range of colours: pale yellow, olive, brown, grey and even black. They have round pupils, heads larger than their necks, smooth scales, a keeled upper body, with an underside that has prominent dark bands.

The snake’s diurnal (active during both night and day) nature, agility, speed, alertness, and the ability to climb trees and rough surfaces, makes them highly versatile predators. Their hunting prowess provides for a diverse palate: lizards, birds (and eggs), frogs, and other snakes as well. Most small prey is swallowed alive, whereas the bigger prey is held down by the snake’s bodyweight (they don’t use the constriction method like pythons) until they weaken and give up.

There are more than 35,000 species of the snake around the world, of which only 600 are venomous. Of these 600, 330 species are found in India. There are only a few that we need to be cautious about. The most commonly found dangerous snakes are the ones called the big four — krait, Russel’s viper, saw-scaled viper and Indian-spectacled cobra. It is necessary to increase awareness about the different species of the snake around the world. The mention of a snake doesn’t evoke the same emotion as does the mention of a dog or a cat. Most people are scared of snakes and the fear stems from the unfamiliarity. So, the immediate reaction on seeing a snake is to either kill it or run away from it.

Rat snakes are fast-moving, and long growing species (7-8 feet) ranging from olive black to yellowish grey with shiny scales. Spectacled cobras are uniformly ash coloured or wheat-brown and best known for their magnificent trademark hood upon sensing a threat. The venomous Russell’s vipers are stout bodied, growing up to 5-6 feet and having three rows of dark symmetrical patches on their dorsal body. The probability of encountering these snakes is however subject to various factors such as the season, habitat, time of the day and so on.